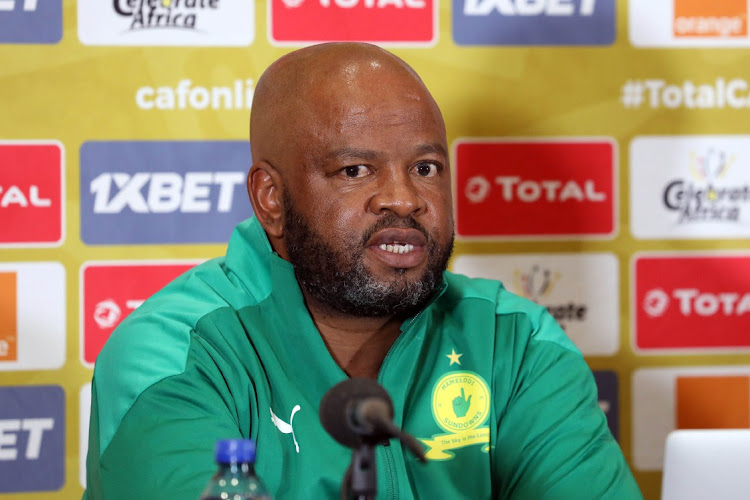 Perhaps Rulani Mokwena was correct to blame Manqoba Mngqithi, after all. On confirming the reported rift in the Mamelodi Sundowns coaching ranks last week, Mokwena pointed an accusing finger at his co-coach Mngqithi, identifying him as the source of the said rift, and confirming he had “apologised”.

Those of us who found the Sundowns coaching arrangement bizarre when Pitso Mosimane left abruptly last year questioned why Mngqithi, as an astute, experienced coach who has served the club for so long, would allow himself to be co-opted into this “co-coaching” business.

Initial speculation was that Mngqithi refused to ascend to the throne when offered. Adding to the confusion was the arrival of Steve Komphela as “senior coach”, a role previously unheard of, at least on these shores.

Last season, the arrangement seemed to work fine, where Mngqithi handled all pre-match and post-match interviews, whereas Mokwena mainly dealt with press conferences. Komphela assumed his obscure role in the background, rarely making media comments, except to occasionally take to Twitter to bash anyone who dared question the coaching arrangement, insisting these sceptics were mainly resentful of seeing a successful African project.

But it was only a matter of time before the cookie crumbled. Expecting three men who’ve served as head coaches to suddenly agree all the time, was at best optimistic, at worst not too thoughtful.

Leadership demands accountability, and there’s no such thing as “joint accountability”. If fans demand to know why wrong substitutions were made, a head coach should be able to stand up and say, ‘I made the decision’.

Mngqithi could have been that man at Downs, calling the shots after Mosimane departed for Al-Ahly. Instead, he finds himself reduced to some sort of a rowdy rascal, his professional integrity questioned publicly by the most junior of the coaching trio.

Mokwena effectively gave credence to mere media speculation, and then hung Mngqithi out to dry, speaking on his behalf by revealing he “apologised”. Mngqithi has no choice but to abide by Mokwena’s decree, even though we still have absolutely no clue what the actual rift was about.

Mokwena also had the nerve to tell us “the elephant is now out of the room, we’ve moved on”, indirectly meaning Mngqithi cannot go back on the issue. How peculiar. Fortunately, unlike Mngqithi, we are not Mokwena’s disciples and will raise any matter, any time, whether people have “moved on” or not.

What makes the situation worse for Mngqithi is Komphela and Mokwena have a history of a loyal alliance. It was Komphela, while coaching Platinum Stars some years back, who took the risk of hiring Mokwena as a fresh graduate.

I cannot imagine that Mngqithi would win an argument against mentor and mentee if there's disagreement among the three. But all this could have been avoided had Mngqithi agreed to be outright head coach. Perhaps he didn’t have sufficient confidence that he could fill Mosimane’s big shoes, but history favoured him.

After all, Mokwena abandoned the project to join Orlando Pirates in 2017, and that’s where he first showed signs of speaking outside the collective and undermined colleagues.

A reader made the observation that Mngqithi looked “unhappy” in the dugout during last week’s match against Kaizer Chiefs. “Mngqithi cut a forlorn figure while Komphela and Mokwena appeared to be the choir masters,” he wrote in a letter published this week.

It’s difficult to feel sorry for Mngqithi because it is, indeed, his fault.

Mamelodi Sundowns co-coach Rulani Mokwena has admitted to "an element of truth" to a disagreement between the club's coaching trio that was the ...
Sport
1 month ago

Rulani Mokwena has implied it was his Mamelodi Sundowns co-coach Manqoba Mngqithi who was in the wrong as the club’s key technical panel members were ...
Sport
1 month ago

Off-the-field tension on the Mamelodi Sundowns bench dominated the build up to their high-profile league showdown against Kaizer Chiefs, but the ...
Sport
1 month ago
Next Article