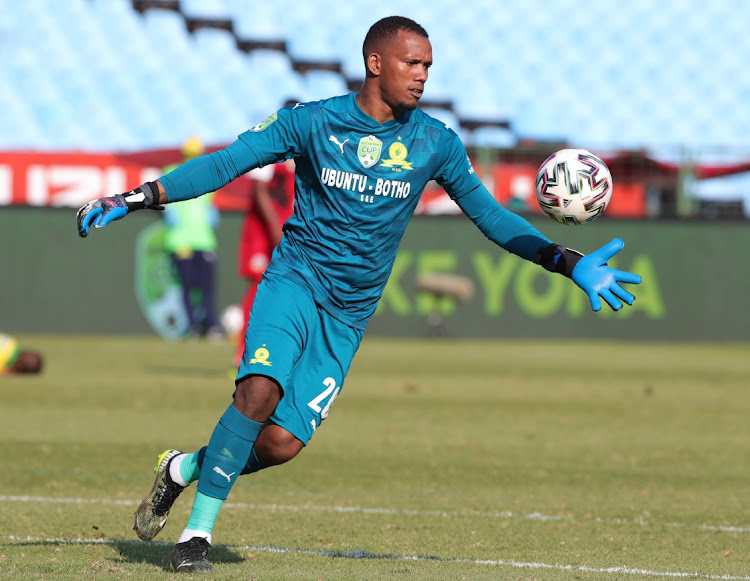 Ricardo Goss is waiting on the wings at Mamelodi Sundowns.
Image: Samuel Shivambu/BackpagePix

As Bafana Bafana appear to be on the brink of goalkeeper crisis, due to the dominance of foreign shot-stoppers in the Premiership, Sihle Ndebele assesses some of the promising local keepers who should be playing regularly to possibly boost their chances to be considered for Bafana in the future.

As things stand, Goss won’t play ahead of Ugandan Denis Onyango and Zambian Kennedy Mweene. The 27-year-old Goss was already establishing himself as a Bafana player during his days at Bidvest Wits but his lucrative transfer to Chloorkop came at a price as he’s now nowhere near wearing the Bafana shirt.

Goss may be seen as a long-term replacement for Onyango, 36, but that Mweene, who is Onyango’s age compeer, is ahead of him in the pecking order, paints a grim picture of him playing anytime soon.

AmaZulu’s first-choice keeper Veli Mothwa, 30, is already a Bafana player, meaning highly-rated Boshoff must find a new club to enhance his chance of playing for the national team. The 25-year-old Usuthu keeper is talented enough to be No.1 elsewhere even if it’s in the GladAfrica Championship for time being.

With Zimbabwean international Washington Arubi showing no signs of slowing down, Ndlovu’s chances of claiming the No.1 jersey at Marumo look slim at the moment. Former Bafana coach Molefi Ntseki had admitted he was monitoring Ndlovu’s progress before he was replaced by incumbent Hugo Broos in May. At 28, Ndlovu should be at the peak of his career, playing first team football.

When City parted ways with Dutchman Peter Leeuwenburgh before the end of last term, many thought it was time for the young Anderson to step up. However, the Citizens decided to recruit 35-year-old Angolan keeper in Hugo Marques instead, minimising the 23-year-old’s chances to play regularly. Anderson is the son of former Bafana keeper Mark Anderson.

Before the sudden resurgence of Sifiso Mlungwana, who was recently warned by Broos to shed some kilos in order to feature in Bafana’s plans, Gumede was Arrows’ first-choice. The 27-year-old now finds himself behind three keepers in Arrows’ pecking order with Mlungwana, Maximilian Mbaeva (Namibian) and newcomer Siyabonga Mbatha ahead of him. Gumede is a former Unde-23 international, meaning he’s no stranger to the national team set-up.

Marumo Gallants goalkeeper Washington Arubi has promised they will overturn the 1-2 defeat they suffered in the CAF Confederation Cup first leg ...
Sport
4 months ago

Kaizer Chiefs goalkeeper Daniel Akpeyi says sport stars should not make "material things" a necessity and have to start "investing in property".
Sport
4 months ago

Forgotten February hopes to fly high with the Birds

Highly rated goalkeeper Jody February, who’s on loan at Swallows from Mamelodi Sundowns, has set his sights on being in Bafana Bafana's set-up in the ...
Sport
4 months ago
Next Article