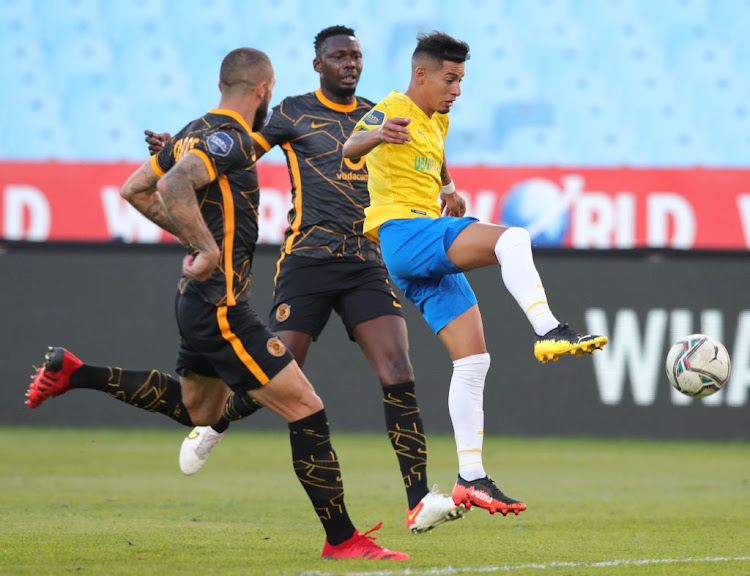 Off-the-field tension on the Mamelodi Sundowns bench dominated the build up to their high-profile league showdown against Kaizer Chiefs, but the Pretoria side shrugged off the furious controversy to put their rivals to the sword in a comfortable 2-0 win at Loftus on Sunday evening.

Two goals in either half from Grant Kekana and Peter Shalulile gave the champions a hard-earned win that will have signalled their intentions to hold onto their crown at the end of this premiership season.

Sundowns got going very early in the game when Kekana rose majestically to beat Chiefs goalkeeper Bruce Bvuma with a fine header at the backpost, putting the home side in the lead in the seventh minute.

It was a goal that came very much against the run of play as Chiefs had put Sundowns under the cosh during the spell, asking serious question of their hosts in determined fashion.

But after Themba Zwane won Sundowns a free kick near the line following a tackle from Phathutshedzo Nange in the sixth minute, the home side made sure it counted when Lyle Lakay delivered an inch-perfect cross that landed neatly on Kekana's head, who managed to sneak above his markers to beat a bemused Bvuma.

It was Kekana's first goal for Sundowns since joining the club during the off-season and he will have been happy to repay the faith shown in him by his new employers.

The champions were not done and returned to haunt Bvuma when the irrepressible Shalulile beat Bvuma with a simple tap-in after a great delivery from substitute Neo Maema in the 62nd minute.

Chiefs could have pulled one back from the spot after Rivaldo Coetzee blatantly handled the ball in the area in the 79th minutes.

Chiefs coach Stuart Baxter looked on from the sidelines and thought that his charges would finally find a way back into the match and force a furious finish to the proceedings, but penalty taker Lebogang Manyama sent his shot crashing into the cross bar with goalkeeper Denis Onyango well beaten.

It was a costly miss that summed up the afternoon for Chiefs as they created several opportunities during the game, but Onyango either stopped them in their tracks or the visitors somehow managed to miss when it seemed getting the ball into the back of the net was the simpler option.

Sundowns co-coach Rulani Mokwena evaded questions about the tension on the club's bench after the game and did not want to dwell on a subject that has been well documented in the last few days.

Reports emerged a few days ago alleging that the coaching hierarchy between Downs' co-coaches Manqoba Mngqithi, Mokwena and ex-Chiefs and Bafana Bafana assistant and caretaker coach Steve Komphela had become a source of tension.

Mokwena confirmed that his fellow Downs coach, Manqoba Mngqithi, had apologised for the incident reported a few days in SoccerLaduma.

The report alleged the incident involved Mngqithi making remarks that undermined Mokwena at a training session when his co-coach was not present.

"The elephant is out of the room, old news...... we move on, the talking is on the pitch and I think the players did the talking. Top performance. In fact, I have to single out Denis Onyango," said Mokwena in his post match television interview as he attempted to avoid any references to the tension on the club's bench..

Chiefs return to league action when they host Royal AM, who won their first match of the season when they beat Chippa United 1-0 earlier on Sunday, at FNB Stadium on Saturday.

Sundowns, on the other hand, welcome TS Galaxy to Loftus in their next league outing on Sunday evening.