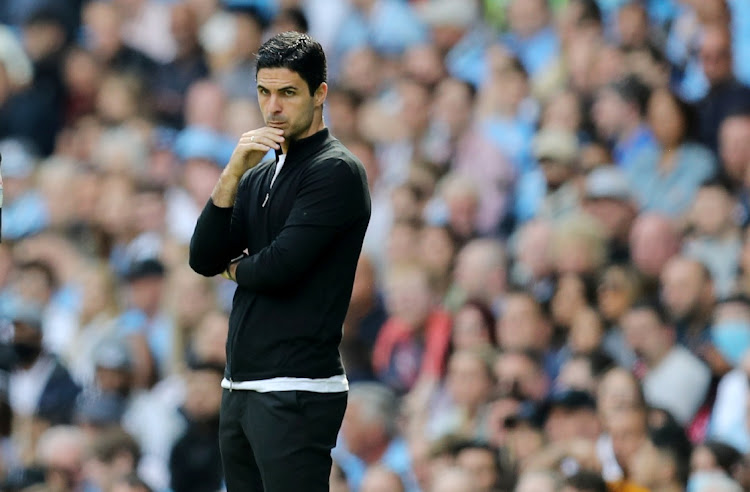 London - Mikel Arteta believes the international break came at the right time for his Arsenal side as they try to overturn a dreadful start to the Premier League season.

A 5-0 hammering at champions Manchester City heading into the break left Arsenal bottom of the table with three defeats from their first three games and no goals scored.

Arteta's side host fellow strugglers Norwich City tomorrow with the pressure growing on the Spaniard.

However, he believes the two-week pause has given him time to get players back from injury and bed in new signings.

"We needed some break to try and get players back. Hopefully by Saturday we will have a different team," he told a news conference yesterday.

"We have a completely different squad. It's unheard of. Now we have to make it work, we have to glide it together, build relationships, chemistry and understanding. We have to do that really quickly."

New signing Ben White is available for tomorrow as are Gabriel Magalhaes, Eddie Nketiah and Thomas Partey, although Swiss midfielder Granit Xhaka is suspended following his sending off against Manchester City.

"I'm really looking forward to having everyone available and to try start the season the way we want," Arteta said.

"We don't want to use any excuses. We know how difficult the start was with injuries and COVID issues we had. We have to reset now. We need to get everybody back on track and start to win football games which is what we have to do".

Should Arsenal lose to Norwich it would be the first time they have lost their first four games of a league campaign since 1923, while never in their history have they failed to score a goal in their opening four league games.

Arsenal fans are growing increasingly impatient but Arteta, who replaced fellow Spaniard Unai Emery in December 2019, said that there was a long-term project in place at Arsenal.

"We have tried to explain the project and the decisions that have been made over the last few months. The amount of changes in the past two years is almost 30 players," he said.

"It's a project that we believed in and we all take responsibility. Now we have to make it work."

Whether he is allowed to continue leading the project will depend very much on Arsenal quickly climbing the table.

"The pressure is always there to be as high as possible in that league table. It's down to us to provide everything we have," added Arteta.

That Orlando Pirates have never clinched any reserve league title, combined with their ineptitude to promote ample young players to the senior team, ...
Sport
1 week ago

Morgan Gould is excited about the new challenge that lies ahead for him after officially hanging up his soccer boots yesterday.
Sport
1 week ago

Banyana Banyana players Bambanani Mbane and Mamello Makhabane plan to use the Aisha Buhari Cup next week in Nigeria to see how far they are in their ...
Sport
1 week ago

While Swallows will be looking to compound Orlando Pirates’ misery when they meet in the DStv Premiership Soweto derby at Orlando Stadium tomorrow ...
Sport
1 week ago

Maritzburg United coach Ernst Middendorp believes it is premature to start talking about what needs to be done to turn the club around despite ...
Sport
1 week ago
Next Article