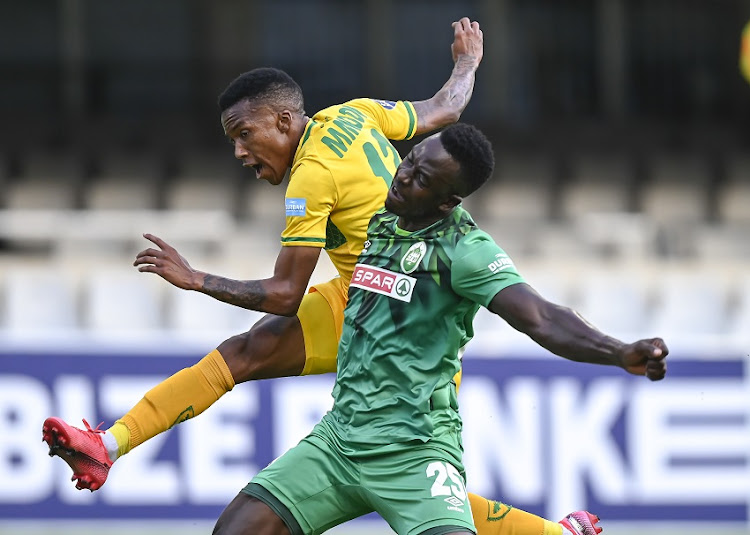 Limbikani Mzava of AmaZulu FC is to late to prevent Pule Mmodi of Lamontville Golden Arrows taking a shot at goal during the DStv Premiership match between Amazulu and Golden Arrows.
Image: Gerhard Duraan/BackPagePix/Gallo Images

AmaZulu coach Benni McCarthy had to rely on his defender Limbikani Mzava for information on Nyasa Big Bullets from Malawi, their opponents in the CAF Champions League preliminary round at Moses Mabhida Stadium tomorrow (5pm).

McCarthy was in the dark about their opponents, but after consulting Mzava, the Malawian defender, he was able to get a little information about Bullets and got more from scouts in that country.

Usuthu are looking to progress to the next round and are aware that they need to win their home game first to have an advantage heading into the second leg next week.

“To be honest, we didn’t know very much about them but fortunately for us we have Mzava from our team who is from Malawi and he was giving us a little bit more inside [information] on them,” McCarthy told reporters yesterday.

“But he is a player who needs to focus on his own game, so we can’t rely on him. So, what we did was we spoke to a couple of networks there, someone who gave us the latest three matches from Bullets.

“So, we were able to analyse the last three matches that they played. We got a little bit of an idea and I also spoke with [journalist] Thomas Kwenaite because of the Soccer Africa programme and his knowledge of African football. He was able to give me the manager, the players to look out for.

“We were able to package all the data we’ve picked up from those guys and we gave the players an idea what we are up against.”

After analysing them, McCarthy highlighted areas he thinks his side will need to work on to win the match and have an advantage for the return leg.

“[Based on] the size of their team – they are quite big boys – I’m guessing if I’m a wise guy [that] they will come here and hope for a draw. Maybe they won’t win the game but if they lose by 0-1 or get a draw in the second leg, they will try to go for it,” he said.

“I had to be a little bit smart and think what would be the best for my players and that’s versatility. You bring speed. You bring trickiness and flair. We also have to try and avoid giving set pieces away against them because that looks like their biggest strength. Hopefully, that will do damage. After all, the worst thing a big player wants to face is someone with speed and flair.”

McCarthy will have to do it without Augustine Mulenga and Thembela Sekhakhane due to injuries.

Meanwhile, Marumo Gallants will face Futuro Kings in the Confederation Cup preliminary round on Saturday at Estadio de Mongomo, Equatorial Guinea, at 5pm.

AmaZulu FC coach Benni McCarthy believes a bit of flair mixed with speed and lot of movements will make it easy for them to beat Malawian side Nyasa ...
Sport
10 months ago

Benni McCarthy says he doesn’t need to be inspired by anyone, including a Bafana Bafana coach, to start believing in young players.
Sport
10 months ago

European countries’ controversial red list of countries with a high degree of risk of Covid-19, which includes SA and denied Ghana a full-strength ...
Sport
10 months ago
Next Article