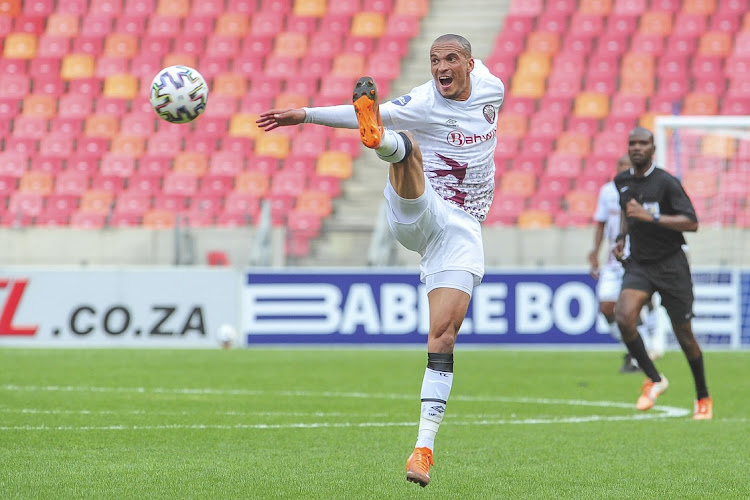 Ruzaigh Gamildien has already punished Bucs this season and could torment them again this Sunday.
Image: Deryck Foster

Since Swallows were promoted to the DStv Premiership last season, they remain undefeated against these three giants, with two victories and five draws.

And ahead of their Soweto derby against Pirates at Orlando Stadium on Saturday, Gamildien revealed that playing against the top dogs was always a way of marketing themselves to earn a move and join them in the future.

“It is self-motivation. Everyone is watching when we play against these clubs and it is an opportunity for us to market ourselves to be able to join them in the future,” Gamildien told Sowetan yesterday.

“We also enjoy playing big teams because it takes the pressure off us. We’ve enjoyed playing against Pirates and we are looking forward to continuing with that this weekend.”

The 32-year-old nearly achieved his dream of moving to a big club when Chiefs showed interest in him last season, with the two clubs even reaching an agreement.

But the move for the attacker, who scored 11 goals in 26 appearances in all competitions last campaign, turned into a nightmare.

Chiefs backtracked on their agreement in principle following the appointment of Stuart Baxter.

Gamildien appeared to have regained his focus after the failed move when he netted a brace for Swallows during their 2-1 victory over Pirates in the MTN8 quarterfinal.

The Bafana Bafana striker insists he was not trying to prove a point but to put his disappointment behind him.

“It wasn’t disappointing. It was just that it was not meant for me to go there,” he said.

“It was also not a point to prove but just to rub some salt in the wounds saying that I’m still going to be the same Gamildien whether I go there or not.”

Gamildien also expects Pirates to come out firing as they will look to avenge their 1-2 defeat they suffered recently but they will be ready for anything.

“Good teamwork first of all, that’s what you can expect from us. They will be doing their homework on us and what didn’t work in the past. We are also trying to fix certain areas we are lacking and we have to continue with the current run that we have.”

New AmaZulu midfielder Pule Ekstein is keen to see the side performing well when they make their debut in the Caf Champions League this week.
Sport
1 week ago

Kaizer Chiefs goalkeeper Daniel Akpeyi says sport stars should not make "material things" a necessity and have to start "investing in property".
Sport
1 week ago

Mamelodi Sundowns midfielder Sammy Seabi, who’s on loan at Chippa United, has chosen to concentrate on the job at hand instead of worrying about his ...
Sport
1 week ago
Next Article