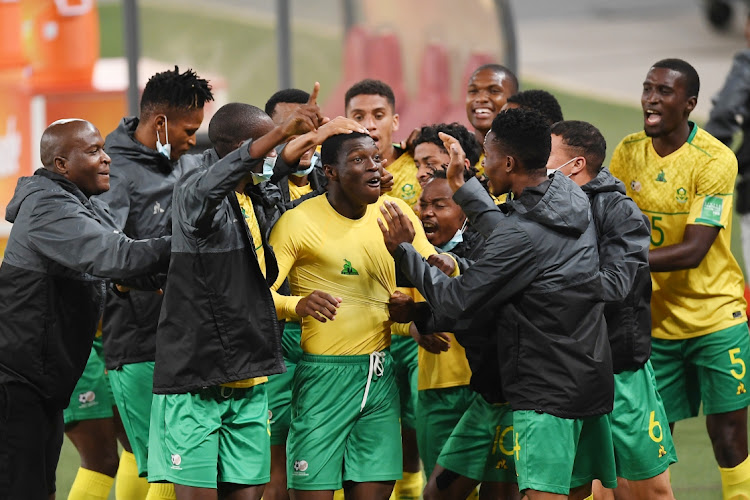 Maritzburg United’s prodigy Bongokuhle Hlongwane, 21, netted the solitary strike that sunk the Black Stars at FNB Stadium on Monday. The victory put Bafana in a favourable position in Group G, having played a goalless stalemate away to Zimbabwe two days earlier in the opening game.

As much as he acknowledges the significance of winning on home turf in crucial games like World Cup and Africa Cup of Nations (Afcon) qualifiers, the 69-year-old Broos has underlined if Bafana want to conquer their pool they must garner away victories as well. Broos targets six points in their back-to-back qualifiers against Ethiopia next month.

“When you’re in the qualifiers for the World Cup or for Afcon, it’s very important that you win your home games. Every point you drop at home, you must get it back away and that’s always difficult,” Broos said

“If you want to be top of the group, you also need wins away, otherwise it’s not possible. At this stage we’ve done what we had to do but we have two games against Ethiopia and I would like to win them both and if we can do that, we’d be very close… the win over Ghana gives us enormous confidence.”

Siyanda Xulu, 31, was the only player aged over 30 in Broos’s squad against Zimbabwe and Ghana, with the bulk of players 27 or below. The Belgian has no intentions to temper with his approach of believing in youngsters, provided they continue to hold their own.

“When will a young boy get experience when he doesn’t play? You have to give them a chance and I will continue doing it, having started doing it from the first day here in SA," the SA coach said.

Broos reserved a special praise of 20-year-old Ethan Brooks, saying he had grabbed the opportunity with both hands against Ghana.

“However, it’s up to them (the young players) to take the chance and I think if I can make an example of Ethan Brooks, he had a very, very good game today (on Monday), so he took his chance. Young players will continue to get their chance in the next months.”

In a match where he was simply impressive, netting the match’s only goal to propel Bafana Bafana to a crucial win over Ghana in the 2022 World Cup ...
Sport
1 week ago

Bafana Bafana coach Hugo Broos is pleading for more time to settle into his position.
Sport
1 week ago

Bafana Bafana intend to take the fight to Ghana when they host the West Africans in a crucial 2022 World Cup qualifier at FNB Stadium on Monday.
Sport
1 week ago
Next Article