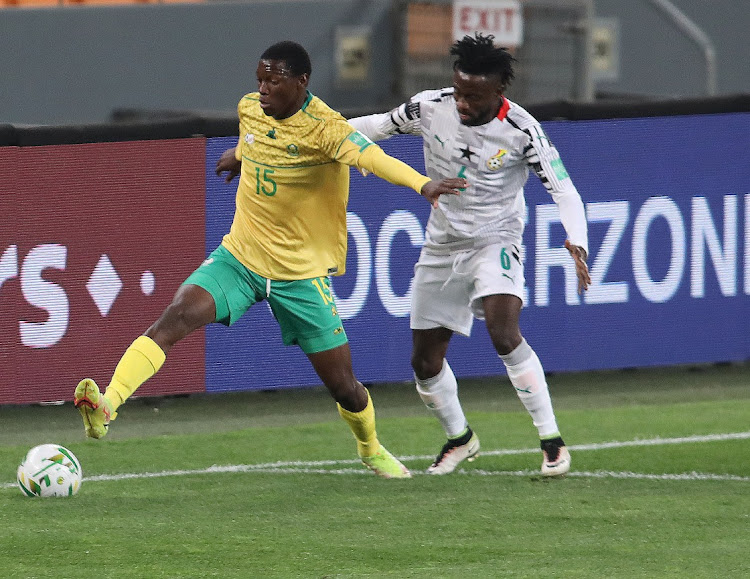 Bongokuhle Hlongwane is convinced that Bafana Bafana's famous 1-0 victory over Ghana in the 2022 Qatar Fifa World Cup qualifier on Monday has given South Africans reason to believe again after years of struggles.

The Maritzburg United striker, who scored the only goal late in the match, was excited about the win.

“I’m happy about the win and I’m sure it will bring hope to the country at large because there has been no hope,” Hlongwane told the media during the Maritzburg and Gift of the Givers partnership unveiling at Harry Gwala Stadium yesterday.

“People have been watching the national team, but there was nothing good happening, it was always negative stuff all the time.

“I hope the win has brought joy, but the job is not done because there are so many games remaining in the qualifiers. In those games, we have to work and use it to our advantage.”

Following his impressive performance with Bafana, Hlongwane plans to translate that to the club level and help the Team-of-Choice register their first win in the DStv Premiership.

Maritzburg, who are at the bottom of the log with no points after two matches, will face Baroka at Peter Mokaba Stadium on Saturday.

“Even here at Maritzburg, I have work to do and help the club because on Saturday we are playing,’’ he said.

“The national team part is over and I’m here to focus on my club and do well so the team can progress.”

Meanwhile, Maritzburg chairman Farouk Kadodia confirmed that their jersey would display the Gift of the Givers foundation logo  on the front.

“On behalf of the board of Maritzburg United, I would like to announce the landmark partnership with a renowned global humanitarian body, the gift of the givers' foundation,” Kadodia said.

“This is the first time that such an agreement has been signed by an African club, marking a unique chapter for football on the continent.

"As part of the deal, the Team-of-Choice will display the Gift of the Givers log in front of the jersey as we aim to use sport to highlight the importance of unity, hope and service to the community.”

The club did not reveal how much the partnership is worth.

Ghana coach Charles Akonnor chalked up Monday’s somewhat shock 1-0 defeat to Bafana Bafana in the 2022 World Cup qualifiers at FNB Stadium to his ...
Sport
1 week ago

In the wake of Bafana Bafana’s important home win over Ghana in their second Group G World Cup qualifiers match, coach Hugo Broos has laid bare his ...
Sport
1 week ago

Swallows hot-shot striker Ruzaigh Gamildien has shared a secret about his superative shows against the big teams Orlando Pirates, Kaizer Chiefs and ...
Sport
1 week ago

New AmaZulu midfielder Pule Ekstein is keen to see the side performing well when they make their debut in the Caf Champions League this week.
Sport
1 week ago
Next Article