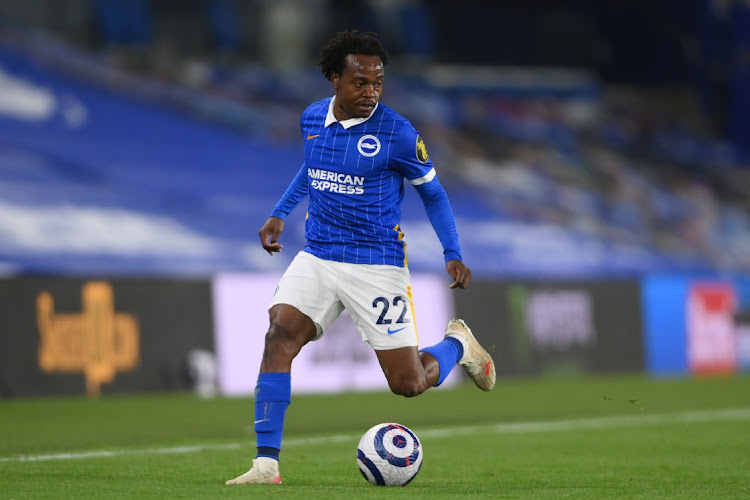 Percy Tau enjoyed very little opportunity to prove himself at Brighton & Hove Albion in the English Premier League. He has since returned to Africa for Al Ahly.
Image: Mike Hewitt

Dolly and Tau add to a long list of SA players who returned home when they were still expected to hold their own in Europe. After his contract wasn’t renewed, Amajita star Rowan Human, 20, left his Israeli side Maccabi Tel Aviv for Maritzburg United before the start of this season.

“Moving from SA to a different environment is demanding because you still have to adapt. Not everyone has that drive and passion, but it’s not a question of talent… our players are good enough. The rate of our players staying for a long time in Europe will increase if they go there at a younger age,’’ Van Heerden told Sowetan.

“When you have players going to Europe when they’re 25, 26 they’re already in the prime of their careers and at that time they can’t be patient... they want to play and at the same time they must adapt, so it clashes.

“I went to Europe when I was 18… even Steven Pienaar was very young when he went to Ajax… we had time to settle. Now our players go there at a later stage than before.”

Ex-Bafana defender Mark Fish who plied his trade in Europe between 1996 and 2005 for clubs like Lazio in Italy and Bolton Wanderers in the UK among others, also weighed in on this burning topic.

“The key thing is a foundation of a player. When I say foundation, I am talking about the character of the person. Talent wise, I think we’re not bad, so I won’t say we’re not good enough. It differs from a player to player,’’ Fish said.

Perhaps Zim and other players from our neighbours survive in Europe because they learn adapting when they play in the PSL and elsewhere away from their country, before earning big moves, while SA players go straight from the PSL to Europe.

Having to endure a lot of criticism from those describing his move to Al Ahly as a downgrade, Percy Tau insists he has made the right decision to ...
Sport
4 months ago

Percy Tau has dismissed the views of those who have criticised his decision to leave English Premier League side Brighton & Hove Albion and move to ...
Sport
4 months ago

The Covid-19 pandemic has wreaked havoc on the Bafana Bafana camp on the eve of tomorrow's Fifa World Cup qualifier against Zimbabwe at the National ...
Sport
4 months ago

By yesterday, Zimbabwe’s chances of having Aston Villa star Marvelous Nakamba available for the 2022 World Cup qualifiers against Bafana Bafana ...
Sport
4 months ago
Next Article