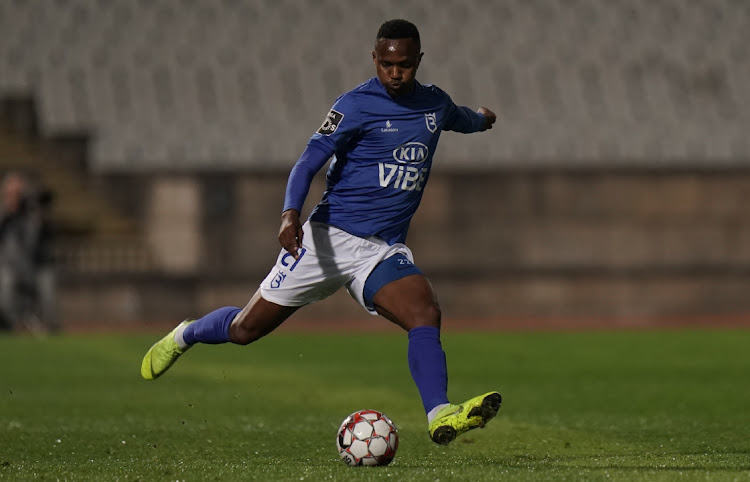 Thibang Phete of Belenenses SAD in action during the Liga NOS match between Belenenses SAD and CS Maritimo at Estadio Nacional on February 22, 2020 in Oeiras, Portugal.
Image: Gualter Fatia/Getty Images

The Covid-19 pandemic has wreaked havoc on the Bafana Bafana camp on the eve of tomorrow's Fifa World Cup qualifier against Zimbabwe at the National Sports Stadium in Harare.

Team doctor Tshepo Molobi confirmed yesterday that Thibang Phete and Thabiso Kutumela did not travel with the team after they tested positive for the virus.

“Unfortunately, we have to report the two Covid-positive cases that we've got in camp. Remember, we did a round of testing with the entire team yesterday [Tuesday] and Wednesday morning and we started getting results from Tuesday night,” Molobi told the Safa media department yesterday.

“The earliest case was Phete, who was immediately isolated and then later on it emerged that Kutumela also tested positive. He was later isolated.”

Molobi also confirmed that the results for the entire team came back negative and that they were supposed to do another test when they arrived in Zimbabwe last night.

“We are hopeful that the second round of tests when we arrive in Zimbabwe will be negative, we hope that we will not get other cases.”

Despite the Covid disruptions, Safa president Danny Jordaan remained optimistic that they will do well against Zimbabwe tomorrow.

“We have hope again, this is the new beginning. We have a new coach, new assistant coach and new technical staff, and young players,” Jordaan said.

“If you look at their faces some are still young and we thrown them into international football. It is a fresh start, new vision and new direction. The first match against Zimbabwe in Harare is going to be a huge test for this team.

“If they can get positive results there, I think we are on our way to the revival of Bafana.”

Meanwhile, former Bafana striker Shaun Bartlett has urged the players to show the desire and attitude to get the results and start the qualifiers on a positive note.

“For me, it is always important to make sure that players understand the magnitude of every game,” Bartlett told the TS Galaxy media department.

“You don’t want to start the qualification with a loss. We need to ensure that we get a good result and have something to build on and hopefully the players will go there with the mentality of wanting to win the game.”

Kaizer Chiefs utility player Njabulo Blom is determined to seize his opportunity after receiving a call-up to the Bafana Bafana squad.
Sport
4 months ago