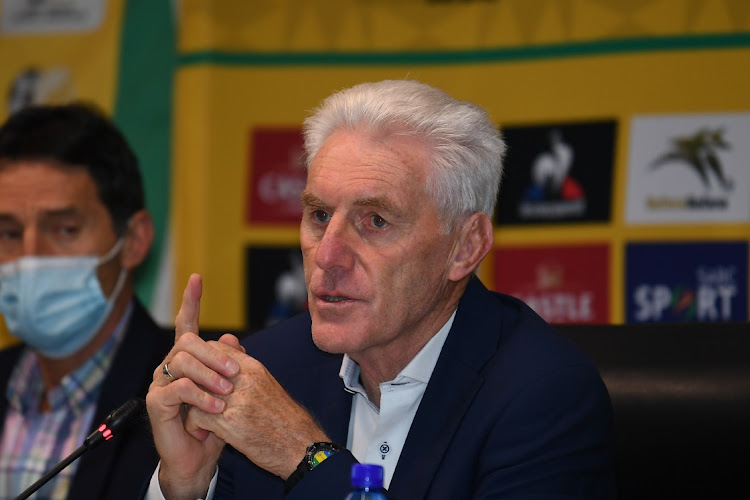 Bafana Bafana coach Hugo Broos will be keeping his fingers crossed that the results of the second round of Covid-19 testing of players do not return with more positive cases in the  camp.

The players were tested upon the team’s arrival in Zimbabwe on Wednesday night with the results expected later on Thursday, and Broos will be hoping there are no more forced withdrawals from his side.

Before the team’s departure to Zimbabwe on Wednesday, Bafana’s medical team withdrew Mamelodi Sundowns attacker Thabiso Kutumela and defender Thibang Phete of Portuguese side Belenenses SAD from the squad after their tests returned positive.

“We are hopeful that from the second round of testing, which will be when we arrive in Zimbabwe on Wednesday evening, there will not be any further cases,” said Bafana team doctor Tshepo Molobi.

“It is unfortunate (that Kutumela and Phete have to be withdrawn) but we have to soldier on, unfortunately we have to report the two positive Covid-19 cases that we have in camp.

“We did a round of testing for the entire team and you must remember that for a large group like this it is almost impractical to get the results all at once. We get them in a staggered fashion and we got the two flagged cases early in the morning, with the first being Thibang Phete.

“He was immediately put in isolation and later on it emerged that Thabiso Kutumela also tested positive and he was also isolated.

“The entire Bafana team, including the medical staff, background personnel and everybody, is around 40 people and of the 40 tests, Phete and Kutumela are the only two cases that came back positive.”

Molobi added that they have tried to run the camp to bio-bubble standards, where the safety of everyone is a priority.

“So, I can safely say for now, with the results that we have, everybody else has tested negative and it is the situation as things stands now. We always strive to make sure that there are no positive cases, that is our approach with every camp and it has been the approach with this camp.

“In this camp we tried to get to bio-bubble standards as much as we could, but you must remember this is an invisible adversary we are fighting against and it will always be difficult to get a 100% clean slate. That is what we are striving for, it is what we have been doing.”