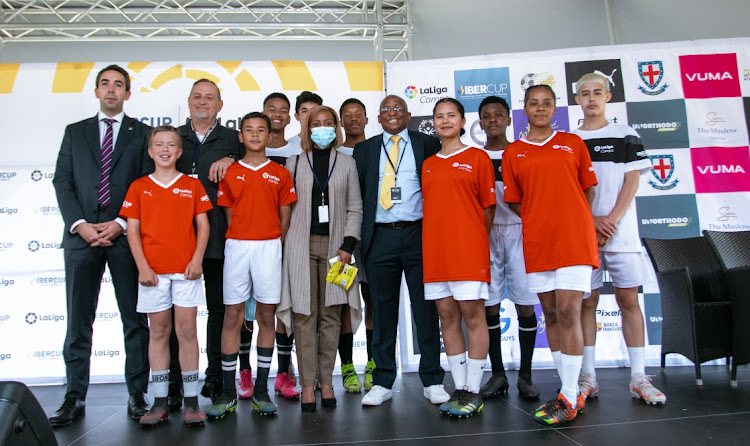 The camps kicked off on Monday at St Stithians College in Bryanston, Johannesburg, with a players' camp for boys and girls from under-10 to under-18.

It will finish with a special coaching clinic on the weekend of August 28 and 29. The successful  La Liga camps were run and managed this week by experienced Spanish-based La Liga Uefa Pro licensed coaches Toni Alvarez and Luis Martinez, along with top IberCup coaches.

There were more than 2,500 requests received for spots at the camps, but due to Covid-19 protocols only 120 young boys and girls could attend.

“We are extremely proud to have so successfully hosted the very first La Liga camps in SA. The camps have exceeded our expectations and we want to thank the 120 young boys and girls who have attended, and so enthusiastically participated in the camps this week,” said Marcos Pelegrin, MD of La Liga Southern Africa at a press conference at St Stithians.

“For La Liga, of course our objective is to grow the Spanish league on the African continent, and to grow the fan base of lovers of La Liga. But equally importantly, it is to roll up our sleeves and tangibly and constructively contribute to the growth and development of football in this region.

"These La Liga camps are another important step in sharing La Liga’s knowledge and expertise for the benefit and development of SA football. The camps have helped teach youngsters the philosophy of Spanish football, while also sharing the sport’s intrinsic values that will lead them to become better footballers and better people as well,” Pelegrin added.

A new global initiative, Lay’s RePlay, which aims to bring joy to deserving communities around the world through the power of football, was launched ...
Sport
1 year ago

Golden Arrows go into their MTN8 semifinal first leg against Mamelodi Sundowns at the Sugar Ray Xulu Stadium tomorrow at 3pm as the underdogs.
Sport
9 months ago

AmaZulu's slow start to this season has left coach Benni McCarthy frustrated. Usuthu are yet to register a victory in three attempts this campaign ...
Sport
9 months ago

SuperSport United coach Kaitano Tembo could afford a smile after watching his team register their first DStv Premiership win with an emphatic 3-1 ...
Sport
9 months ago
Next Article