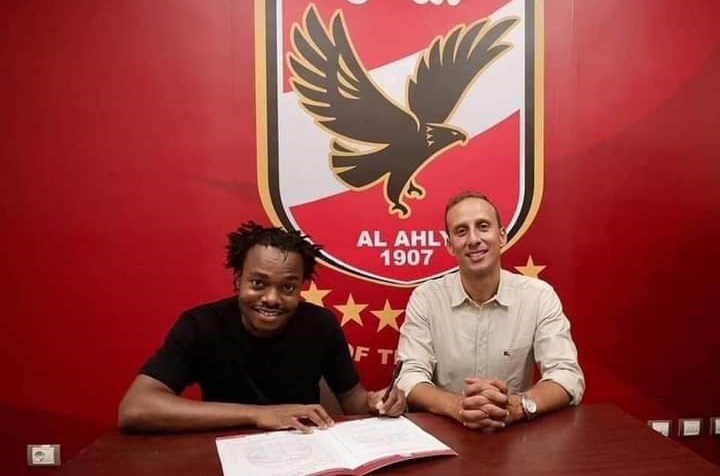 Al Ahly SC have still not officially announced the signing of Bafana Bafana star Percy Tau on loan from Brighton and Hove Albion, but a leaked promotional image of the star has confirmed he has signed for the Egyptian giants.

While Ahly were slowly announcing the signings of Mozambican Luís Miquissone from Simba SC and left-back Kareem Faoud from Enppi, a promotional of Tau at a desk in the Ahly offices in Cairo, putting pen to paper, has done the rounds on social media before being officially released by the club.

Tau will reunite at Africa’s Club of the 20th Century with his ex-Mamelodi Sundowns coach Pitso Mosimane. Mosimane is believed to have been behind the deal for the 27-year-old attacking star’s move to Egypt.

Tau can bring a “Sundowns element” of creativity, pace and ability to run at defenders as Ahly seek to recapture their Egyptian Premier League title ceded to bitter Cairo rivals Zamalek this week, and defend their Caf Champions League title for third year running.

He can also serve as a like-for-like replacement if Ahly’s Malian forward Aliou Dieng, a source of interest from clubs in England, Spain and Turkey, leaves the Cairo club as expected.

Tau’s move to Egypt is a poorly kept secret. TimesLIVE broke the news that English Premier League outfit Brighton, where the Bafana star has struggled to break into manager Graham Potter’s XI, had agreed on the loan move to Ahly.

Mosimane has won five trophies in Egypt since his move there from Sundowns in late September 2020. He was instrumental in Tau's development as a footballer, polishing a raw talent and making him a key player in the Downs team that won the 2016 Caf Champions League.

Tau, 27, was signed by Brighton from Sundowns in July 2018. He was loaned to Royal Union St Gilloise in Belgium's second tier, winning that league's player of the season award for 2018-19. He won a Belgian league title on loan at top-flight Club Brugge in 2019-20.

He was on form in a third loan to RSC Anderlecht before being recalled midway through 2020-21 to Brighton, where Tau has struggled for game time.

In Ahly, Tau joins Africa's most successful club. They are twice Caf Champions League winners under Mosimane, who steered the Red Devils to their ninth and 10th titles in the continental showpiece.

The Bafana attacker will test himself in some of the continent's most vociferous and competitive domestic football in Egypt.