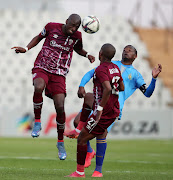 Image: Muzi Ntombela/BackpagePix Musa Nyatama and Thabo Matlaba of Swallows FC challenged by Ndumiso Mabena of Royal AM during the DStv premiership 2021/22 match between Swallows and Royal AM on 22 August 2021 at the Dobsonville Stadium, Soweto .

Despite their 1-0 victory over Royal AM in their opening match of the DStv Premiership on Sunday, Swallows coach Brandon Truter was not entirely satisfied with the outcome.

Truter believes his side should have won comfortably, but had to wait a late winner substitute Strydom Wambi at Dobsonville Stadium.

As they prepare to visit AmaZulu at Kings Park Stadium tomorrow, Truter said they would work on their finishing, as he demanded immediate improvement.

“Decision making in the last third, I was so upset at halftime when we were still goalless with all the opportunities we had and all the box entries,” Truter told the club's media department after the match.

“That’s one aspect we need to look at. We are away to AmaZulu, who were in second place last season, a good team, and a good coach. We will go there and try to influence our structure and try to be dominant. Hopefully, we will get more than one goal and keep our clean-sheet intact.”

Meanwhile, Royals coach John Maduka feels his side lacks confidence with this being their first match since the club bought Bloemfontein Celtic status last week.

“We didn’t play the game we wanted. It was the first game of the season and they are all tricky. Swallows had an advantage because this is their second game already in the season,” Maduka said.

“Most of the time, we allowed them to have the ball, then after winning the ball, we wanted to try and get them on the counterattack. Something that did not happen because we were slow in reaction. We were very slow going forward.

“Our reaction when we had the ball there was no movement even in the final third. We know that we will get better and we will come right.”

Royals will be aiming to register their first victory when they host Cape Town City at Chatsworth Stadium tomorrow (5pm).