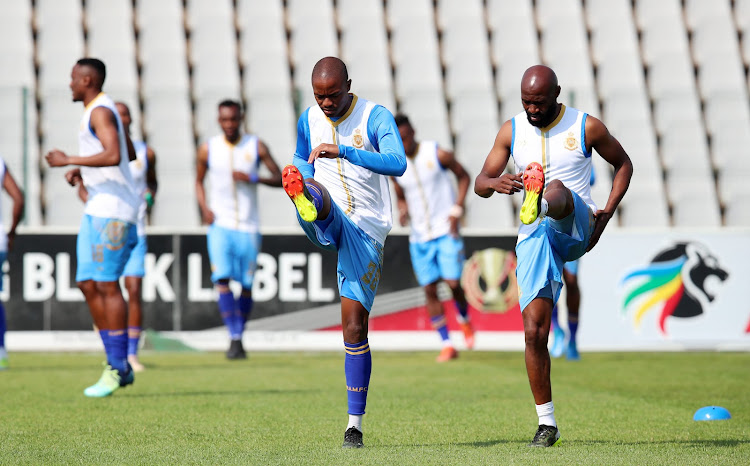 Royal AM players warm up ahead of their debut DStv Premiership 2021-22 match against Swallows FC at Dobsonville Stadium in Soweto on August 22 2021.
Image: Muzi Ntombela/BackpagePix

The date for the announcement of the outcome of the DC, where Royal were found guilty on all charges after heads of argument were heard on August 11, had been set for August 21.

No announcement or media release has come from the PSL on the outcome.

On Tuesday morning Eric Mabuza of Mabuza Attorneys, the firm representing Royal —who have since bought the premier division status of Bloemfontein Celtic, and played their first match in the top flight this past weekend — said the outcome was settled.

Asked who was favoured by the settlement, Mabuza said: “It was a good settlement. It’s a settlement where both sides are happy.”

PSL prosecutor Nande Becker could not be reached for comment or details about the settlement.

The DC settlement agreement will pass to the new owners of Royal, Lawrence Mulaudzi and Tshakhuma Tsha Madzivhandila FC, who have bought the Durban team’s franchise to compete in the GladAfrica Championship (National First Division, or NFD).

Royal’s owner, Durban businesswoman Shauwn Mkhize, has bought the top flight franchise of Celtic from previous owner Max Tshabalala, and moved the team to Durban, renaming it Royal AM. They lost 1-0 to Swallows FC in their first premiership match at Dobsonville Stadium on Sunday.

The purchase of Celtic followed numerous court defeats to have Royal reinstated as NFD champions following an arbitration award that saw Sekhkhune United win the second-tier and Royal bumped from leaders to the playoffs.

The Durban club did not honour all four playoff matches, where Chippa United preserved their premiership status.

Many were expecting that the DC, apart from awarding 3-0 wins to the opposition in those four matches, as per NSL handbook rules, might impose a stiff fine and even recommend that an expulsion of Royal come before the PSL’s board of governors.

However the sale of Royal to TTM — approved along with the Celtic sale by the PSL’s executive committee on Friday, August 13 — appears to have pre-empted and influenced the ultimate DC outcome.

Royal communications manager Sthembiso Hlongwane and advocate Dali Mpofu, who also represented Royal in the DC, could also not be reached for comment or clarification on the details of the settlement.