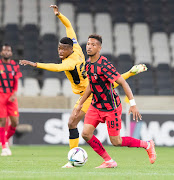 After their impressive performance against Mamelodi Sundowns in the MTN8 last weekend, where they came from two goals down to force a 2-2 draw, only to lose on penalties, a lot was expected from Chiefs in their opening league match last night.

But credit to Galaxy, who had a decent game plan which frustrated Chiefs on the night. Galaxy, who paraded most of their new signings, were quick to press Chiefs and didn’t give them any breathing space to play.

Chiefs coach Stuart Baxter kept faith in Eric Mathoho and Daniel Cardoso in the heart of defence, while he only made one change from the team that lost to Sundowns in the MTN8 quarterfinal, with  Bruce Bvuma starting ahead Itumeleng Khune between the posts.

It was Galaxy who started the brighter of the two but they failed to penetrate the Amakhosi defence in the opening half and were reduced to taking shots from outside the box which didn’t trouble Bvuma. Chiefs slowly started to find their rhythm late in the first stanza.

Samir Nurkovic came close to giving Chiefs the lead with a glancing header from close range that was saved by Galaxy debutant goalkeeper Vasilije Kolak. That was the best chance of the half as both sides failed to create clear-cut scoring chances.

Chiefs were not looking as dangerous in attack as they were against Sundowns as Galaxy closed them down quickly.

Galaxy continued to dominate in the second half and frustrate Chiefs, but still failed to create enough scoring opportunities.

Baxter made a tactical switch early in the second half, taking off the ineffective Nurkovic for Keagan Dolly. That seemed to inject life into their attack as they started to find gaps behind the  Galaxy defence.

Kgaogelo Sekgota, who struggled in the first half, was finding joy in the left side as he started to deliver decent crosses, but Galaxy dealt with them well. Both teams huffed and puffed late in the second half as they searched for the opening goal. It was a game where chances were far and few between, with both goalkeepers having little to do in the match.

Meanwhile, Swallows got their campaign off to a perfect start following a late 1-0 victory over Royal AM at Dobsonville Stadium.