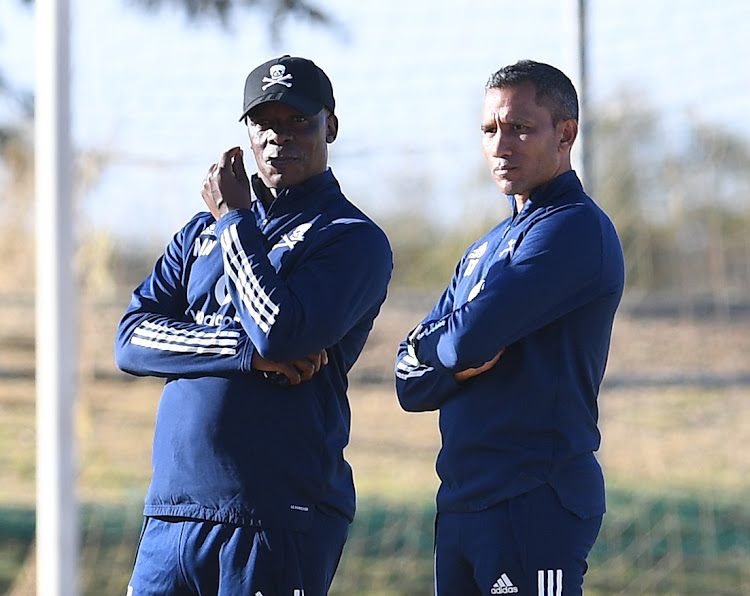 Zinnbauer’s one year, six months and a game as Bucs coach — stepping down on Monday after the opening match of 2021-22 as Bucs unconvincingly lost 2-1 to Swallows FC in the MTN8 opening round on Saturday — was marked by hesitancy in decision-making by the mild-mannered German.

Pirates would go on winning runs under Zinnbauer. Too often, between those, they lacked direction in their play, line-ups and systems changed at bewildering pace and fans bemoaned reactive football from a squad that, given it’s strength, needed to impose themselves more.

As Davids and Ncikazi — who impressed with high intensity football as head coaches of Maritzburg United and Lamontville Golden Arrows — take charge of Pirates in their DStv Premiership opener against Stellenbosch FC at Orlando Stadium on Saturday, expect Bucs’ tempo to go up a notch.

“We want to play good, high-intensity football. A really hard-working team when we don’t have the ball — a high-pressing compactness,” Davids said.

“And when we have the ball we really want to see the ball running on the ground, playing a free-flowing football.

“That was our task in the few sessions we had, to bring back the Orlando Pirates style of play.

“Our task is first and foremost to win but then once you’ve achieved that, to try and win in style.”

Davids took a positive from the flat cup defeat to Swallows that was the final straw in Zinnbauer’s tenure that Pirates responded almost immediately to with Kabelo Dlamini’s penalty having gone 2-0 down inside 25 minutes.

“It was a very nervy start. I think the build-up of what happened and the start to the game didn’t make it easy for us,” he said.

“And when you make mistakes like we did and suddenly you are on the back foot it’s a ripple effect.

“But I’m very proud of how the players then responded after going 2-0 down. It’s normal then to give up, but then you have to look at how after that nervy start and that bump in the road we then stood up and got back into the game. So that is positive too.”

Bucs ended a six-year trophy drought winning last season’s MTN8 under Zinnbauer. But the multitalented squad will aim, even with their early coaching setback, to improve on their third place in the league.