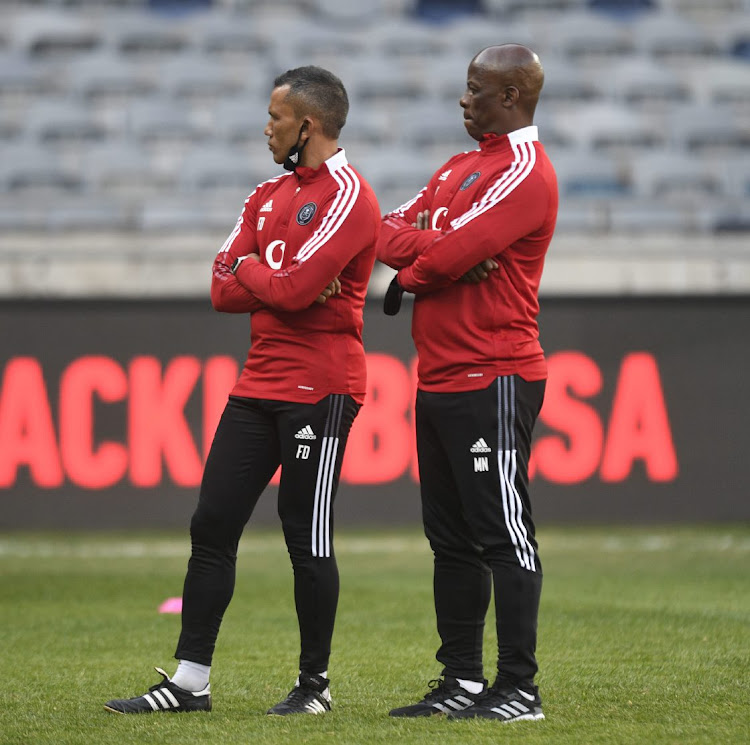 Orlando Pirates look likely to take a leaf out of Mamelodi Sundowns’ book by having co-coaches following the departure of Josef Zinnbauer.

While Pirates are yet to confirm Zinnbauer’s replacement, Davids has made it known that him and Ncikazi will be in charge of the Sea Robber maiden league game of the season against Stellenbosch at Orlando Stadium on Saturday (3pm).

It looks like winning on Saturday is what Pirates bosses have asked Davids and Ncikazi to do before giving them the head-coach job.

“Coach Mandla and I have been given a mandate to win on Saturday. We’ve to get the job done on Saturday and that’s it. We come a long way, we’ve worked together before [at Maritzburg United] and we share the same football idea,’’ said Davids.

Manqoba Mngqithi and Rulani Mokwena are co-coaching the Brazilians. Quizzed whether him and Ncikazi would also be joint-coaches, Davids said. “There’s no title [to call him and Ncikazi].”

Davids, who earned a lucrative switch to Pirates in January 2019 on the back of propelling the Team of Choice to fourth finish, their highest ever, in the 2017/18 term, has revealed their plan is to play an enterprising brand of football, a thing many felt Pirates lacked under Zinnbauer.

“We want to play good football. We want to play high intensity football and be a really hard working team even when we don’t have the ball,’’ Davids said.

“In the two training sessions we had, our task was to bring back the Orlando Pirates’ style of play. Our other task is to win. We want to have that compactness and when we have the ball we want to see it running on the ground, playing free flowing football.”

The 40-year-old Davids also emphasised as the club they stand by beleaguered goalkeeper Richard Ofori, who found himself on the receiving end of fans’ wrath following a glaring blunder in their 2-1 defeat to Swallows in the MTN8 quarterfinals last Saturday.

Orlando Pirates' German coach Josef Zinnbauer has resigned just one match into the new season in which the club crashed out of the MTN8 cup ...
Sport
3 months ago

Josef Zinnbauer has resigned from his post as Orlando Pirates coach with immediate effect.
Sport
3 months ago

Orlando Pirates’ 1-2 loss to Swallows in the MTN8 quarterfinal at Orlando Stadium on Saturday proved there is a lot of work to be done if they are to ...
Sport
3 months ago
Next Article