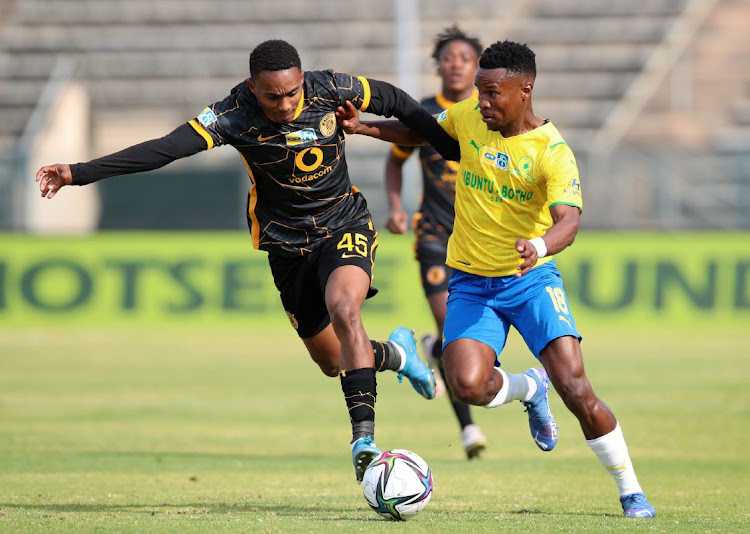 Njabulo Blom has vowed to give his all and cement his place at Kaizer Chiefs this season. Blom played at a new position, right-back, in the MTN8 quarterfinal against Mamelodi Sundowns on Sunday, where Chiefs lost on penalties.

He usually plays as a midfielder, but coach Stuart Baxter saw a need to play him as a right-back and had a good game where he also created an assist for their first goal.

“I always appreciate the game time that I get because I know it is important for me as I’m still growing and have a lot to learn. So I take it as a learning experience,” 21-year-old Blom told reporters through the club's media channels.

This was after he was rewarded with R10,000 cash prize by Carling Black Label Cup following his man-of-the-match performance against Orlando Pirates at the beginning of the month.

Blom also received an additional R10,000 to donate to a charity that focuses on eradicating gender-based violence.

“Whether they play me as a midfielder or right-back, for me it is like giving my best every game that I get. For me, as a young player, it gives me confidence and it helps me to even work harder.”

Following their satisfactory performances against Pirates and Sundowns, Blom believes they are heading in the right direction this season.

“I think as a team we did well in both games. We know where we are going and we are willing to go far. We are working hard at training, listening to the coach’s instructions.

“We are willing to work hard this season to get good results and win some trophies.”

“I did not expect that now that we’ve reshuffled and have quite a few new inclusions, that we would learn so fast and click so fast. It’s good that we are getting to gel this fast. With the Kaizer Chiefs that gave the champions (Sundowns) a problem, I believe we can grow further and be tough to beat,” Parker told the club's official website.

“There are a lot of signs that Amakhosi will be back soon in terms of the style of play and in terms of winning ways. It’s now up to us as players to keep our attitude and our game temperament levels up every time come match day.”

Chiefs have shifted their focus to the DStv Premiership opener against TS Galaxy at Mbombela Stadium on Sunday at 5pm.

No shame in losing MTN8 to a club of Downs’ calibre: Baxter

Kaizer Chiefs coach Stuart Baxter sees no shame in losing to a club of Mamelodi Sundowns’ calibre on penalties.
Sport
9 months ago

Swallows coach Brandon Truter has hailed Ruzaigh Gamildien’s performance in their 2-1 victory over Orlando Pirates in the MTN8 quarterfinal at ...
Sport
9 months ago
Next Article