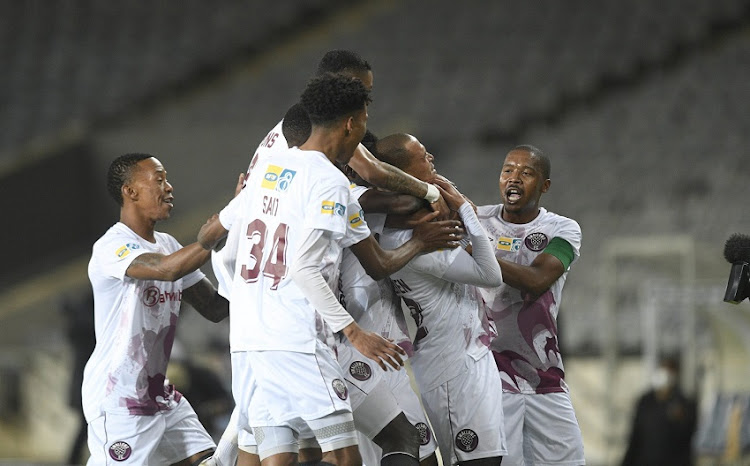 Swallows took the game by the scruff as they started brightly, Ruzaigh Gamildien bagging strikes in the 16th  and 23rd minutes.
Image: TWITTER/PSL

Swallows took the game by the scruff as they started brightly, Ruzaigh Gamildien bagging strikes in the 16th  and 23rd minutes.

In a game marked by its share of tough derby challenges Bucs struck back quickly through Kabelo Dlamini’s 30th-minute penalty. After that they barely manage the penetration or scoring chances necessary to deserve an equaliser or more.

As Pirates came out battling to shake off the pre-season cobwebs, and Swallows quite crisp in their shape and passing, the Birds were able to take a two-goal lead inside 25 minutes.

Bucs lifted themselves to strike back with a crucial strike bringing them back into the match-up by the half-hour.

Gamildien, at one point a target for Kaizer Chiefs in the off-season, was Swallows’ go-to goals man last campaign. He got off to a noteworthy start to the new campaign with a quick, quality brace.

The first came – after Fortune Makaringe brought down forward Lehlogonolo Matlou on the left edge of Pirates’ box – when Gamildien struck a scorching free-kick that beat Richard Ofori at his near post.

Minutes later Ofori gifted the Birds a second. Matlou pushed the ball ahead for his own run. Bucs’ keeper advanced outside his area for the intercept but hesitating on the ball to allow Matlou to rob him of it and feed Gamildien. The striker coolly chipped into the exposed goal from 30 metres.

Pirates had to lift their tempo to stay in the game. Vincent Pule played Deon Hotto, leading the line for Pirates, through alone on the left, Virgil Vries fouling and referee Luxolo Badi pointing to the spot. Dlamini struck low to the right of Vries.

Both benches made a double change from the break.

Truter switched up his midfield, Keletso Makgalwa and Monnapule Saleng replacing signings Khetukuthula Ndlovu and Dillan Solomons, thje runs of both keeping Bucs' defence on their toes. Zinnbauer brought in Happy Jele and Bandile Shandu to shore up his defence, taking out fullbacks Bongani Sam and Wayde Jooste.

Pirates, though, needed more ingenuity in attack. Apart from Shandu’s chip from deep onto the chest of Hotto on the run, the striker miscuing with Vries to beat, they battled to crack Swallows’ resolute egg.