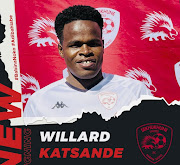 Willard Katsande has expressed his pleasure at joining an ambitious outfit in promoted DStv Premiership team Sekhukhune United, who he says have assembled a competitive squad for the 2021-22 season.

Having been released from 10 years serving Kaizer Chiefs with distinction, the 35-year-old, no-holds-barred Zimbabwean defensive midfielder was announced among five more signings by Limpopo team Sekhukhune on Friday evening.

“It’s a real opportunity for me to play in a different environment. And I’m not just coming here to add numbers – I’m here to compete,” Katsande said.

“The team has shown good love and support, so all I want to do is repay them with my hundred percent commitment.

“And the message to all the supporters of Babina Noko is that we just support the team.

“As we all see that the team has assembled a good squad. And even last season when the team was playing for promotion you could see that they had exciting talent.

“So it’s going to be a good mixture and we’re going to find a good balance to make you [the supporters] happy.”

Sekhukhune said Sarupinda (22) and Nsabata (27) will add depth and quality to their squad.

“Sarupinda, who is a graduate of Aces Youth Soccer Academy [in Harare], had an impressive out during the Cosafa Cup 2021 tournament held in South Africa last month,” the club said in a statement.

“Nsabata, from Chingola in Zambia, was part of the Zambia Under-23 national team that reached the 2015 Africa U-23 Cup of Nations held in Senegal.

“Katsande, Nsabata and Sarupinda started training with the team on Thursday while Jampies started on Monday.”

Sekhukhune coach MacDonald Makhubedu and assistant Thabo Senong have taken the approach for a promoted team of revamping their squad almost entirely. Their latest batch of signings brings their off-season acquisitions to more than 20.

Sekhukhune on Thursday announced they were releasing 16 players and putting two on loan.