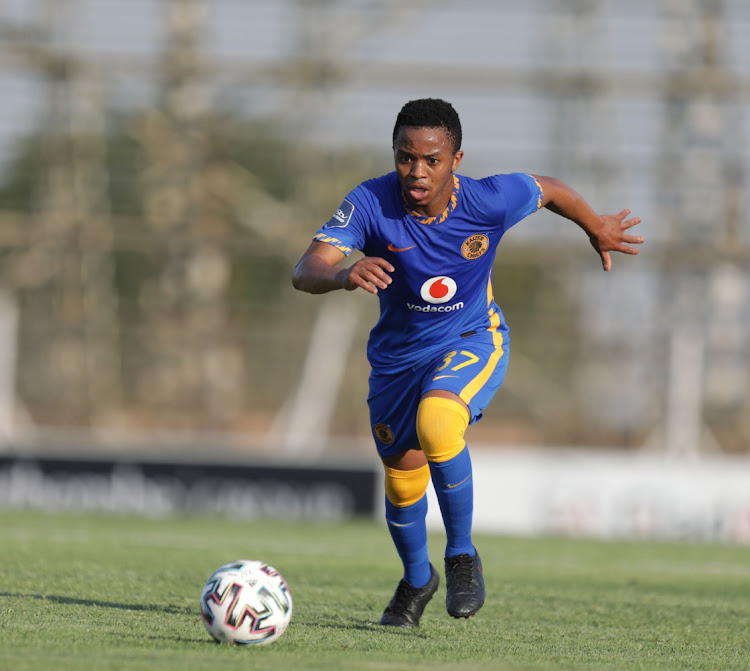 Nkosingiphile Ngcobo of Kaizer Chiefs during the DStv Premiership 2020/21 match between Black Leopards and Kaizer Chiefs at Thohoyandou Stadium, Polokwane, on 26 May 2021.
Image: Kabelo Leputu/BackpagePix

It has turned out Al Ahly's much-hyped interest in Kaizer Chiefs ace Nkosingiphile Ngcobo isn’t as weighty as many have perceived.

Ngcobo’s Al Ahly link was sparked by the Red Devils coach Pitso Mosimane’s statement in his recent interview with SA FM that he’s looking to lure a SA player to Egypt.

Be that as it may be, Raeed Samir, an editor for Cairo-based sports publication El-Ahly.com, has given the impression that Ngcobo isn’t really Ahly's main target, suggesting the CAF Champions League title holders are more keen to sign Bafana Bafana ace Percy Tau and Mozambican striker Luis Miquissone.

“The name of Ngcobo was mentioned once in the media here [in Egypt]. The information we have is that Mosimane wants to sign Tau [who’s on the books of English Premier League side Brighton & Hove Albion ] first and then Miquissone [from Tanzanian giants Simba] second,” Samir told Sowetan.

“The club's management want to sign Miquissone first, then Tau after that [perhaps meaning Mosimane’s priorities clash with the club’s]. I think Mosimane would help Ngcobo improve but the priority is to get Tau and Miquissone.’’

Sowetan also gathered that Al Ahly haven’t tabled any official offer for Ngcobo, who was promoted from the Chiefs development ranks in 2017. The lad from Pietermaritzburg has since accumulated 44 top-flight appearances, netting four times in all tournaments.

Amakhosi legend Tinashe Nengomasha has urged the club not to stand in Ngcobo’s way should Al Ahly make a formal approach. The retired midfielder feels Al Ahly and Mosimane would help Ngcobo to get ready to ply his trade in Europe.

“This thing of saying it’s too early to try something else must end. If Ahly are really interested and the offer is good, Ngcobo must be released. It might be his last opportunity to go to Ahly, so he must leave as early as now if they really want him,” Nengomasha told Sowetan from his native Zimbabwe yesterday.

“Pitso is good with grooming players...he made Tau and Keagan Dolly great players at Sundowns and they moved to Europe. I believe working with Pitso at Ahly can benefit Ngcobo in terms of making him ready to move to Europe.”

Kaizer Chiefs coach Stuart Baxter is impressed with the depth his side has in the goalkeeping department.
Sport
9 months ago

Keagan Dolly’s arrival at Kaizer Chiefs sends a message about the club’s level of ambition to restore itself to competitiveness, Amakhosi coach ...
Sport
9 months ago

Despite scoring a brilliant goal in a friendly on Saturday, Bafana Bafana ace Percy Tau is understood to be still open to the idea of leaving ...
Sport
9 months ago

That the bulk of Kaizer Chiefs’ new recruits are no longer youngsters has already set tongues wagging, with many highlighting the newcomers are not a ...
Sport
9 months ago
Next Article