Teko gets taste of La Liga magic before big kickoff 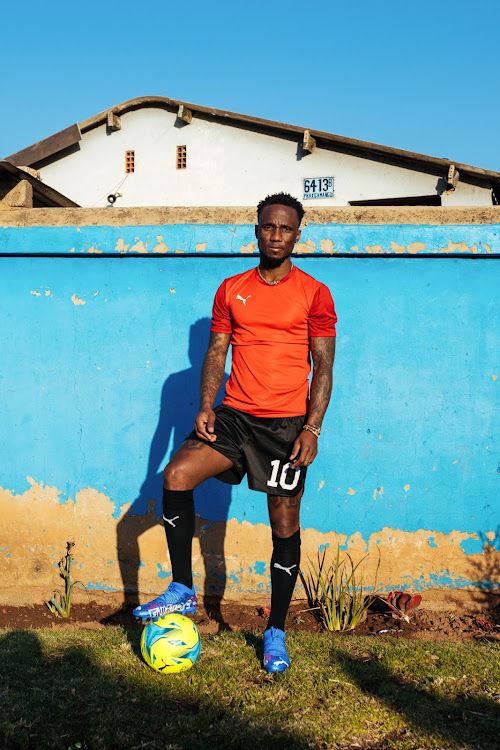 Teko Modise was one of South African football’s greatest thinkers and technicians, so it’s no surprise that the former Bafana Bafana creative midfielder regards Spain’s La Liga as the best league in the world for the football artist.

With the kickoff of the 2021/22 La Liga season now just days away, Modise brought some Soweto sauce to Spain as he launched the new season’s La Liga Puma Accelerate and Adrenaline match balls with a special photo shoot in his Meadowlands hometown with football visual artists Kasi Flavour.

“In La Liga they put the emphasis on what makes football football, which is the highly technical and tactically gifted abilities of footballers. It is such a special league, with a brand of football you cannot find anywhere else in the world.

"The emphasis is on the football culture and being respectful on the side of the player to play the football on the ground. That’s the philosophy Spanish football believes in and why for a footballer La Liga is the league everybody with especially that level of technical ability wants to play in,” says Modise.

As the 2021/22 season kickoff date, August 14, approaches, La Liga Southern Africa managing director, Marcos Pelegrin, was enthusiastic about partnering with the former Bafana Bafana icon and with the Kasi Flavour team led by Kabelo Kungwane on the Meadowlands shoot.

“It was fantastic working with Teko and the Kasi Flavour team in Soweto, as we look to bring South Africans closer to the passion, heartbeat and flavour of La Liga. The new season is nearly upon us and we will continue to find new ways of ensuring La Liga is relevant, exciting and relatable to South African football fans,” says Pelegrin.

For the passionate purists and football fans who love their carpet football played with style and panache – where brain wins over brawn –  for Modise there is no equal.

“Spanish football has the ability to attract such players that don’t necessarily need height, they don’t need to be super strong on the pitch or have speed, but they are very smart, thinking players,” says the former Orlando Pirates, Mamelodi Sundowns, SuperSport United and Cape Town City midfielder.

And Modise had a bird’s eye view of the unique Spanish style of football finesse when he faced the Spanish national team with Bafana Bafana in the 2009 Fifa Confederations Cup third place playoff game won 3-2 by Spain in Rustenburg.

“Playing against Spain in the 2009 Fifa Confederations Cup was the most educational game of my life, where you find yourself not only admiring the opponent but also studying the game. What are the things that they do and how they actually do them, because it is something else to watch them on TV and analyse them, but totally different playing against them on the pitch. It was one of the most difficult and frustrating games for me, because they were actually better than they thought they were,” says Modise.

“In that squad they had Andres Iniesta, Sergio Busquets, Xavi, Xabi Alonso, David Silva, players who know how to play simple football, but are so skilfull and are able to control the tempo. They know when to pass, how to pass, they know how to commit the fault and how to draw the fault.

"So to face such superstars and technically talented players was very, very frustrating. But you could also see these are the type of things that they didn’t learn right away, but were instilled into them as kids playing in a development side and growing with those fundamentals of the game,” Modise added.

While Modise is an avid Barcelona fan, he was first drawn to La Liga by the incredible Real Madrid "Galacticos" of Zinedine Zidane, Luis Figo, David Beckham and Ronaldo.