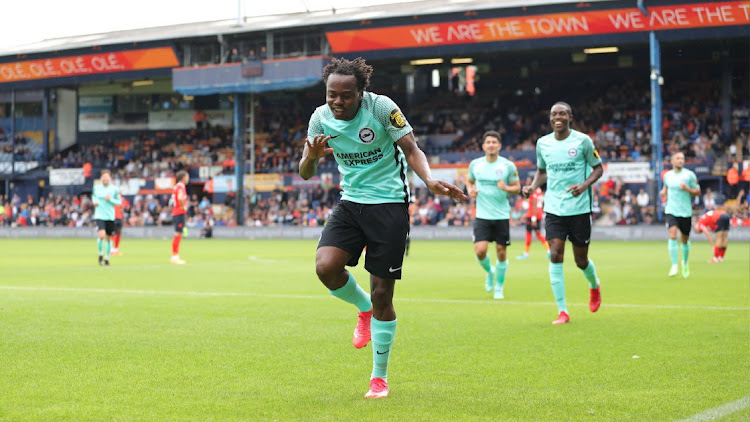 Despite scoring a brilliant goal in a friendly on Saturday, Bafana Bafana ace Percy Tau is understood to be still open to the idea of leaving Brighton & Hove Albion.

Tau netted his first goal in Brighton colours when they thumped second-tier side Luton Town 3-1 in a preseason friendly. Tau cut a relieved figure after scoring. The 27-year-old attacker has been linked to Belgian side Royal Antwerp.

“Look, Percy wants to play week in week out and at Brighton there are no guarantees of that, hence he may still leave before the start of the season,’’ a source close to Tau said.

“The boy is frustrated there because of a lack of game time. You see even in these friendlies he plays in the second XI and that shows he’s not up there in the pecking order. I think he may return to Belgium [where he spent the better part of his stay in Europe on loan at Royale Union Saint-Gilloise and Club Brugge].

The English Premiership transfer window slams shut on August 31, while the season gets under way in two weeks. Tau’s Brighton contract expires in June next year. The Bafana star’s agent Mmatsatsi Sefalafala wasn’t keen to comment, saying “I don’t think it’s the right time to speak about Percy now”, when Sowetan contacted her last week.

Bafana legend Lucas “Rhoo” Radebe, who attained the cult status in the same English Premiership when he turned out for Leeds United between 1994 and 2005, has urged Tau to fight harder to win Brighton coach Graham Potter’s heart.

“I don’t think Percy must leave. I see no point in returning to Belgium because he’s been there before. He’s talented enough to play at Brighton. He must fight harder...show them he can do it,” Radebe said.

Rhoo is of the view that the goal Tau scored will boost his morale ahead of the new season.

“That goal will build his confidence. He must never look back. This season must be the season he shows the world that he’s a great player,” noted Radebe, before adding that it took him a season and a half to find his feet at Leeds.

That the bulk of Kaizer Chiefs’ new recruits are no longer youngsters has already set tongues wagging, with many highlighting the newcomers are not a ...
Sport
2 months ago

TS Galaxy midfielder Lindokuhle Mbatha wants to emulate Siyabonga Nomvethe and John “Shoes” Moshoeu as players who have played beyond their 40s in ...
Sport
2 months ago

Late replacement Kaizer Chiefs new goalkeeper Brandon Petersen made a resounding introduction to the myriads of the club’s fans when he helped the ...
Sport
2 months ago

Kaizer Chiefs have unveiled their new jersey ahead of the coming domestic premiership season.
Sport
2 months ago
Next Article