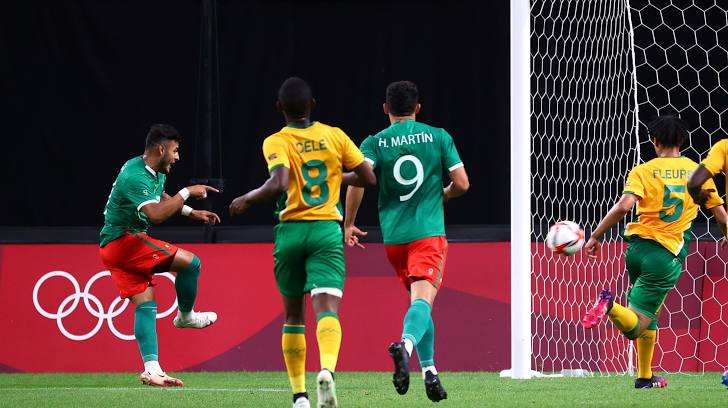 SA under-23 side meekly crashed out of the Olympic Games in Tokyo with their tails firmly between their legs after they were drubbed 3-0 by an industrious Mexico in the last match of the group stages.
Image: Twitter/Team SA

The SA under-23 side meekly crashed out of the Olympic Games in Tokyo with their tails firmly between their legs after they were drubbed 3-0 by an industrious Mexico in the last match of the group stages at the Sapporo Dome on Wednesday.

The result ensured that their campaign ended hopelessly with the South Africans rooted to the foot of the group standings after defeats to hosts Japan‚ France and Mexico to confirm the team's worst showing in the Olympic Games after appearances in Sydney in 2000 and Rio in 2016.

Mexico‚ who qualified for the next round with Japan on Wednesday‚ took the lead in 19th minute after Uriel Antuna delivered a telling cross into the box to unmarked Alexis Vega‚ who showed composure to bury the ball into the top of the net.

For the opening goal‚ Antuna was allowed enough space on the right wing from where he spotted Vega‚ who got the better of a few South African defenders en route to beating hapless goalkeeper Ronwen Williams.

Things worsened as Mexico doubled their lead five minutes from the restart through alert Luis Romo‚ who tapped in a loose ball in the box into an empty net.

Just before the hour mark‚ SA’s problems magnified when they were reduced to 10-men after captain Tercious Malepe was shown a red by referee Matthew Conger for an unsporting tackle on Henry Martin.

The effects of Malepe’s tackle did not stop Martin from getting on with the game as he made his presence felt a few minutes later when put the game beyond the reach of the South Africans with the third goal.

Mexico had a moment of ill-discipline as midfielder Carlos Rodriguez was the second player in the match to go for an early shower after he was adjudged to have obstructed South Africa’s attacker Luther Singh‚ who was in a good scoring position.

The team's performances at these Games follows disappointment in previous appearances.

In 2000 the SA under-23s captured the imagination of the football world when they registered their only victory in the Olympics after the Matthew Booth-led Amaglugl-glug stunned a Brazil side that had one Ronaldihno in its ranks. He could do very little as SA waltzed to a famous 3-1 win.

But SA‚ who boasted the likes of Aaron Mokoena‚ Fabian McCarthy‚ Quinton Fortune‚ Steve Lekoelea‚ Jabu (Pule) Mahlangu‚ Siyabonga Nomevethe and Benni McCarthy‚ eventually finished at the bottom of the log after they lost to Japan and Slovakia.

In Rio‚ South Africa lost to Denmark and drew with Brazil and Iraq as they once again finished at the bottom of the log. They return home from Tokyo after another disappointing tournament and the future of coach David Notoane is now in serious doubt.