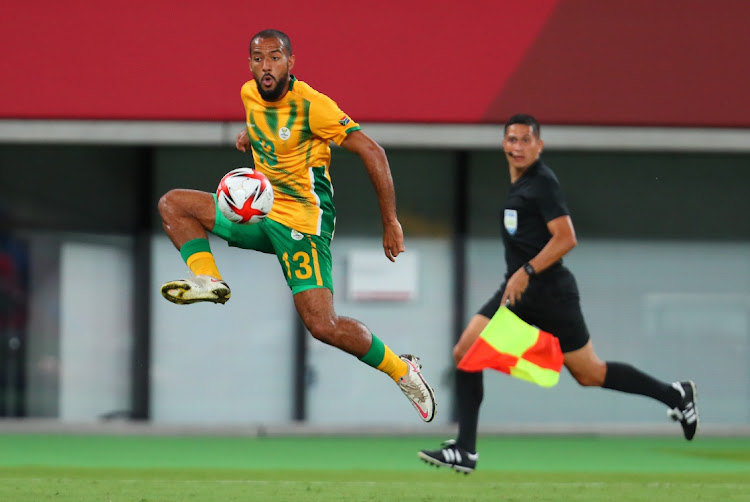 A defensive approach rendered SA Under-23 team impotent as they suffered a 0-1 defeat to hosts Japan in their opening Group A fixture of the Olympics at Tokyo Stadium yesterday.

This approach divested SA that creativity and left two attackers – Luther Singh and Evidence Makgopa – frustrated as they hardly received supply to threaten the hosts’ rearguard. The only overage player in the squad, Ronwen Williams, produced a couple of brilliant saves to keep SA in the game before eventually leaking one goal that sunk them.

A few SA players such as Mosele and Sibusiso Mabiliso at left-back appeared to be suffering from stage fright as they constantly misplaced passes. Right-back Reeve Frosler also looked out of his depth.

Having only joined the team late, alongside Kaizer Chiefs teammate Nkosingiphile Ngcobo, following their participation in the CAF Champions League final, perhaps fatigue was the reason Frosler wasn’t at his element. Ngcobo was only introduced in stoppage time, replacing Mosele.

SA hardly trained before this game as the team had to quarantine after two players in Thabiso Monyane and Kamohelo Mahlatsi tested positive for Covid-19 on Saturday.

Given these circumstances, it’d be harsh to slate the performance Young Bafana put against Japan, though there’s a general feel that they should have tried to attack from the word go. Young Bafana’s next game is against France, who were thumped 4-1 by Mexico in another Group A match earlier yesterday.

It was a day to forget for Sylvain Ripoll's France who collapsed in the second half when Alexis Vega, Sebastian Cordova, Uriel Antuna and Erick Aguirre netted for Mexico at the Tokyo Stadium.

France, chasing a first Olympic medal since winning gold in 1984, now face a daunting task to qualify from Group A ahead of games against SA and Japan.

"The first thing we now have to do is digest this disappointment," Ripoll said. "We only have two days. There's no time to waste."

The SA Under-23 team are out to make history by becoming the first team to reach the knockout stages of the Olympic Games.
Sport
3 months ago

Despite spending three days in isolation because of Covid-19 positive cases, the SA under-23 team is optimistic about winning their opening Group A ...
Sport
3 months ago

There is barely time to reflect on their CAF Champions League defeat for Kaizer Chiefs stars Nkosingiphile Ngcobo and Reeve Frosler, as they have to ...
Sport
3 months ago
Next Article