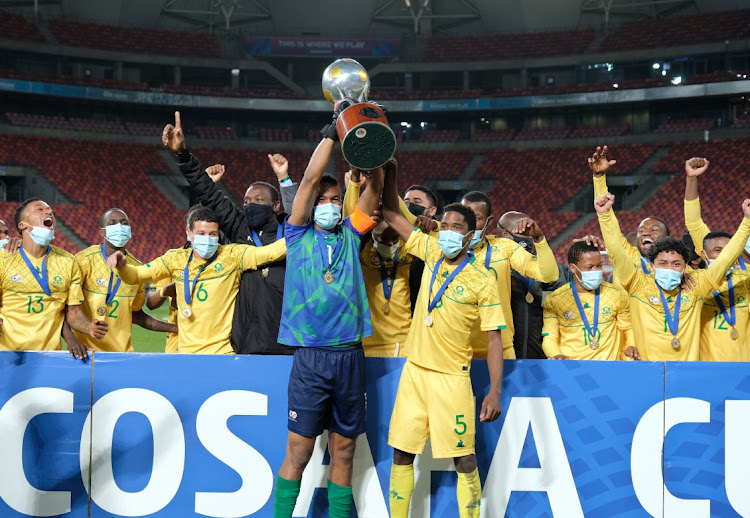 Caretaker Bafana Bafana coach Morena Ramoreboli strongly believes a number of players who were part of the Cosafa Cup triumph have a chance to play for the full-strength senior national team.

With Bafana coach Hugo Broos still in his native Belgium to get vaccinated for Covid-19, his assistant coach Helman Mkhalele was meant to lead the senior national team at the Cosafa Cup. However, “Midnight Express”, as Mkhalele is known, contracted the coronavirus a few days before the start of this regional competition.

Mkhalele’s unavailability saw Ramoreboli, who’s an under-17 technical team member, step up to the plate. Using an understrength squad after some teams refused to release players, Bafana still managed to clinch the Cosafa Cup after beating guest participants Senegal 5-4 on penalties in the final at the Nelson Mandela Bay Stadium in Gqeberha on Sunday.

Ramoreboli has since predicted that numerous players who helped SA win the Cosafa Cup will form part of Broos’s team in more competitive games. Bafana's next task is a World Cup qualifier away to Zimbabwe on September 1.

“I think we have a bright future, considering that there are players who are playing regularly for Bafana who weren’t part of this camp. We had 12 players who were playing for Bafana for the first time. That simply means that coach Hugo Broos has [a big] enough pool to choose from going forward,” said Ramoreboli.

Bafana finished the tournament without conceding a goal from six games, netting an impressive nine goals. AmaZulu’s duo of Siyethemba Sithebe and Veli Mothwa scooped the player and goalkeeper of the tournament gongs, while Bloemfontein Celtic striker Victor Letsoalo walked away with the Golden Boot for his four goals.

“It [the Cosafa Cup] also gives him [Broos] a chance to look at all the players. This tournament was a test of character for many of the players. I believe that one thing that worked for us was character,’’ said Ramoreboli.

Ramoreboli shot to stardom when he engineered third tier side Maluti FET College’s famous 4-1 win over the mighty Orlando Pirates in the Nedbank Cup back in 2013. He also served as assistant coach at Celtic in the past.

Bafana Bafana have earned the right to smile again after the long-suffering national side beat Senegal on penalties to win the 2021 Cosafa Cup at a ...
Sport
1 year ago

Bafana Bafana will play Mozambique in the Cosafa Cup semifinal tomorrow (at 2pm) at Nelson Mandela Bay Stadium after finishing top of Group A with 10 ...
Sport
1 year ago
Next Article