Galaxy striker not giving up on Bafana dream 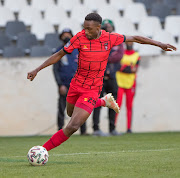 TS Galaxy talisman Mxolisi Macuphu is celebrating a decade of playing the game at the highest level and has set himself a target of scoring 10 goals in the DStv Premiership 2021/22 season.

He made his PSL debut in the 2010/11 season for Golden Arrows, and he has never looked back.

Most players vanish after two to three seasons in the top flight, but the former Jomo Cosmos player is still standing after further Premiership stints with SuperSport United, Chippa United and Bidvest Wits.

He attributed his longevity to the support of his family and friends over the years for reminding him to stay focused. “I went through different phases in the PSL and faith kept me going. My family has been my pillar of strength, and I always say this to every footballer in the PSL.

"Support from family is the most important thing. The support I get from my family has helped me to become the person that I am today. I still respect the game, stay grounded, and respect fellow footballers and supporters. You can never cheat the game. There are no shortcuts in football, you have to work hard, and you will reap the rewards one day," said Macuphu.

He said he worked with coaches who reminded him that hard work pays off in the game. “The various coaches that I've worked with told me to stick to the basics of hard work and believing in yourself to achieve your goal. I am a religious person, and I have faith and always believe that anything is possible."

He urged aspiring footballers never to give up on their dreams of turning professional. Macuphu often stays behind after training sessions to work more on his own, applying practice on tactical changes that have come in the position (centre-forward) he plays.

“The game changes every time and as a player, it is important to do extra training sessions to work to keep up."

He helped TS Galaxy to secure ninth place in the Premiership, scoring five goals in the 2020/21 season, and his target for the new season is to double this tally. “I want to do more in the new season and give it my all for the club. Anything above 10 goals would be an achievement for me."

At the age of 32, the talented midfielder has not given up on the hope to represent Bafana Bafana.

“I watched the Euro 2020 tournament and saw that age is nothing but a number. I watched the big players return to play for their countries, and I want to push for a call-up in the national team this season. I can still make a meaningful contribution to the senior national team."