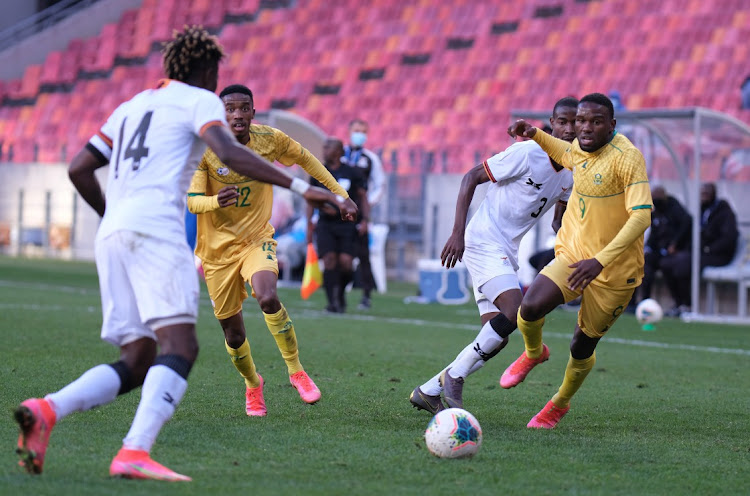 Bafana Bafana will play Mozambique in the Cosafa Cup semifinal tomorrow (at 2pm) at Nelson Mandela Bay Stadium after finishing top of Group A with 10 points from four matches.

The hosts ended their group phase unbeaten after they were to held to a 0-0 draw by Zambia in their fourth match. SA had won its earlier three matches against Botswana (1-0), Eswatini (1-0) and on Tuesday Lesotho (4-0).

Caretaker coach Morena Ramoreboli gave players who didn’t play in the earlier matches a chance yesterday as the team had already qualified for the semifinal as group winners.

The coach was pleased with the overall performance by his boys in the group stage and he is looking forward to a clash against Mozambique, who finished second in Group B.

The Mambas were tied in second place with Namibia on seven points but qualified by virtue of their better head-to-head record.

“I think we started very slow, but it is understandable and according to a plan. We knew that they would come at us in the first 15 minutes,” Ramoreboli told SuperSport TV after the game.

“So we wanted to try and be disciplined in the first 15 minutes. Then we started to play from there.

“Yes, it was a game which our boys managed very well. We knew that they would come at us, but we had to be organised and know when to add numbers in attack and overload our defensive blocks. I think we did it very well.

“With the types of the players, it will tell you the type of system we have to play. We have those types of players who are allowing us to play and they are also enjoying it because it is within their strength.”

In the other semifinal, Senegal will play Eswatini at Nelson Mandela Bay Stadium after Bafana's match.

Senegal, from West Africa, are Cosafa invited guests for the tournament this year.

The developmental Bafana Bafana at the Cosafa Cup ended Group A unbeaten and top of the log with their 0-0 draw against Zambia at Nelson Mandela Bay ...
Sport
3 months ago

Victor Letsoalo’s hat-trick on his senior debut for SA inspired Bafana Bafana to a 4-0 thumping of Lesotho at Nelson Mandela Bay yesterday in the ...
Sport
3 months ago

Bafana Bafana will be eager to seal qualification for the Cosafa Cup next round when they face Lesotho at Nelson Mandela Bay Stadium today (3pm).
Sport
3 months ago
Next Article