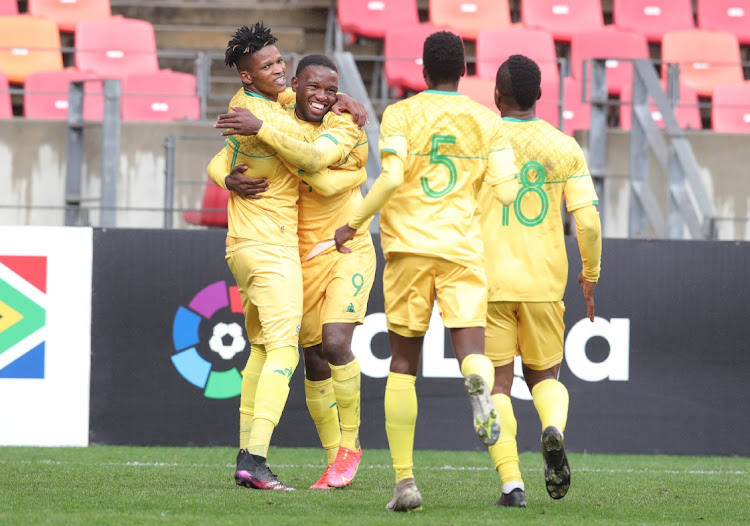 Victor Letsoalo’s hat-trick on his senior debut for SA inspired Bafana Bafana to a 4-0 thumping of Lesotho at Nelson Mandela Bay yesterday in the Cosafa Cup.

The win not only saw SA top Group A but also took Bafana to the semifinals of the southern Africa championship with a game to spare.

They will play Zambia in their final group today (3pm).

SA top Group A after winning all their three matches, against Botswana, eSwatini and Lesotho.

What will please caretaker coach Morena Ramoreboli is that they are yet to concede a goal in this tournament, having scored six in the process.

Bloemfontein Celtic striker Letsoalo became only the second player to score a hat-trick for Bafana, following in the footsteps of Benni McCarthy who did it against Namibia in 1998.

Yesterday, Ramoreboli used a 3-4-3 formation which made it easy for the wingers to attack in the first half and it paid dividends earlier on.

They were off to a perfect start when 28-year-old Letsoalo headed home the opener with the match just five minutes on the clock before Sphelele Mkhulise doubled the lead 15 minutes later.

It was a dominant half by Bafana and showed some improvement from their opening two matches, where they won 1-0 against Botswana and eSwatini.

Letsoalo completed his brace on the stroke of half-time from a rebound after Lesotho goalkeeper Jessy Matsie failed to hold on the ball from Mkhulise shot to make it 3-0.

Letsoalo then completed his hat-trick 12 minutes after the restart and became the first player to do so at this tournament and gave Bafana a 4-0 lead.

He proved why he should’ve been selected with the initial squad as he continued where he left off last season in the DStv Premiership.

Letsoalo together with Vusi Sibiya and Lebohang Maboe were called up following the withdrawal of other players due to Covid-19 chaos.

Expressing pleasure with his effort on TV after the game, the Celtic striker said: “They (teammates) know me in the box, goals will be there and the supply is good. I’m happy to have scored the goals for Bafana on debut.

“I was called out of the blue and the guys welcomed me well in camp and I'm looking forward to contributing more.”

With a huge lead, Ramoreboli could even afford to make several changes as he rested key players with an eye on today’s match against Zambia.

Bafana Bafana will be eager to seal qualification for the Cosafa Cup next round when they face Lesotho at Nelson Mandela Bay Stadium today (3pm).
Sport
1 year ago

Bafana Bafana utility midfielder Lebohang Maboe is confident SA will win the Cosafa Cup, which is under way in Gqeberha, Eastern Cape, despite using ...
Sport
1 year ago
Next Article