Unloved at Chelsea, metronomic Jorginho is viewed in a different light in Italy 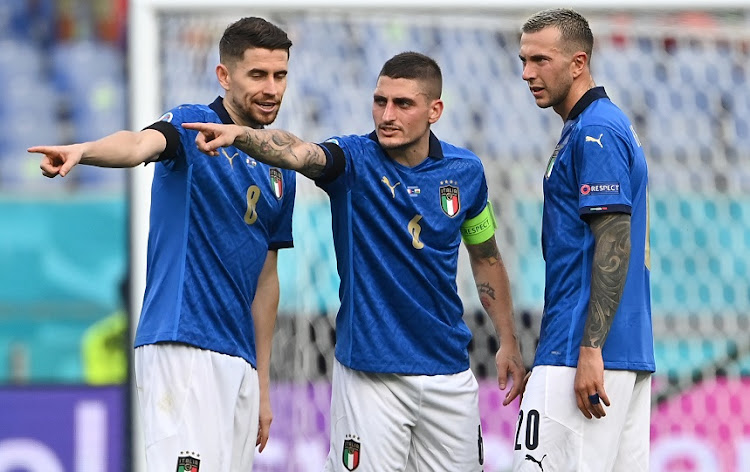 Jorginho, Marco Verratti and Federico Bernardeschi of Italy in the Uefa Euro 2020 Championship Group A match against Wales at Stadio Olimpico in Rome on June 20, 2021.
Image: Andreas Solaro - Pool/Getty Images

A handful of players turn into a different beast altogether when they represent their country.

Miroslav Klose is Germany's all-time top goalscorer without a truly elite club record to match, while Olivier Giroud, second on the France scoring chart ahead of Michel Platini, has struggled to find regular playing time at club level in recent years.

For Italy, that man is midfield metronome Jorginho, as key a figure as anyone for the Azzurri as they look to win their second European Championship when they play England in Sunday's final at Wembley.

At Chelsea, even his own fans have struggled to warm to Jorginho since he signed from Napoli in 2018, with many pointing to a perceived laborious style in possession.

The pundit reaction has been far from complimentary, too.

Even before May's Champions League final, when Chelsea beat Manchester City with Jorginho at the heart of midfield, former Blues winger Joe Cole questioned whether the Brazil-born holding player should be starting a match of that magnitude, insisting there are "holes in his game".

Such criticism has not gone unnoticed. In May, when asked if Chelsea coach Thomas Tuchel's system and his role within it finally allowed people to see his true value, Jorginho said: "I hope so! If they don't by now, they don’t understand football.

"The results, the numbers, are there. So whoever wants to say something different, they can have their opinion, but it will not affect me. Criticism will always be there. It depends how you take it. It's just motivation to work even harder."

Under Tuchel, Jorginho has become so pivotal that Chelsea fans have warmed to him, but under previous coach Frank Lampard, the deep-lying midfielder was keeping fan favourite N'Golo Kante out of the team, and that did not sit well with the Stamford Bridge masses.

Since Tuchel has taken over, however, the German has found a way to incorporate both Kante and Jorginho alongside each other, to much success. Still, not everyone is won over by the Italian's willingness to keep possession, rather than attack at pace.

For his country, Jorginho is seen in a very different light.

"He has spent some fantastic years at Chelsea and I am proud to have him in our team," Italy forward Lorenzo Insigne said earlier at Euro 2020.

"I'm not the one deciding if he deserves the Ballon d'Or (award for the world's best player), but I hope he'll be shortlisted, he deserves so. I call him The Professor and we are all happy to play with him."

The Italian media are equally enamoured, and have got behind this call for him to win a surprise Ballon d'Or should Italy beat England, highlighting how few can claim to win the Champions League at club level and be instrumental in European Championship success in the same season.

With Nicolo Barella bringing the flair and Marco Verratti providing the engine, Jorginho offers the perfect calming anchor for Roberto Mancini's midfield three, while effectively protecting the back four.

His eight interceptions against Spain were the most made by any player in a match at the last two European Championships. Such stats often go unnoticed, but that does not make such an output any less impressive.

England coach Gareth Southgate has changed his system several times in this Euros, but one element has remained constant throughout - two holding midfielders, who are important to both attack and defence.

For Italy, that role is performed by one man, whose efforts are finally being appreciated.