SA within a whisker of Cosafa knockout phase 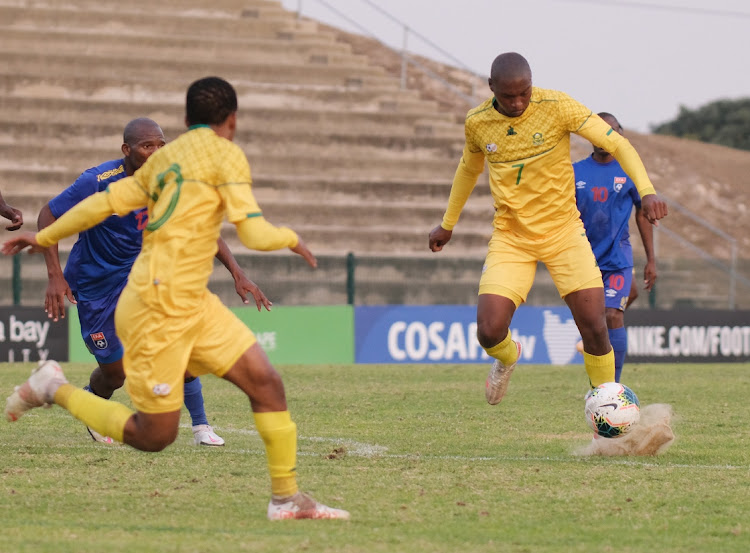 An improvised Bafana Bafana side put in a workmanlike shift to dispatch a full-strength Eswatini 1-0 in their second Cosafa Cup Group A match at Isaac Wolfson Stadium in Gqeberha yesterday.

As it happened when they beat Botswana 1-0 on Tuesday, where Kagiso Malinga came off the bench to score, Bafana had to again rely on a second-half substitute, Thabang Sibanyoni this time around, to claim maximum points.

The victory left SA on six points, meaning they now need just one win from their last two pool phase games against Lesotho and Zambia to qualify for the knockout phase of this regional tournament.

Bafana made a single change from the XI that beat Botswana in their Group A opener on Tuesday, with Malinga starting in a slot that was occupied by Sibanyoni against Likuena.

Just like they did against Lesotho, SA started the game without a natural left-back, despite having talented left-footed Bloemfontein Celtic full-back Sifiso Ngobeni, who was introduced in the 74th minute for Ethan Brooks.

The first half was like watching paint dry as both sides never looked like scoring. Even so, Bafana enjoyed more ball possession, thanks to the promising midfield combination of Siphelele Mkhulise, Siyethemba Sithebe and Brooks.

At times lone striker Malinga looked isolated up front, with wingers Masilakhe Phohlongo and Monnapule Seleng unable to support him.

Eswatini were reduced to 10 men when their skipper Felix Badenhorst received his second yellow card of the match for kicking Mkhulise’s ankle while the ball was at his feet in first-half stoppage time. Badenhorst was first cautioned for an unnecessary challenge on Sithebe.

Sihlangu Semnikati returned from the halftime break an improved side and Bafana goalkeeper Veli Mothwa had to pull off a few brilliant saves early in the second half to keep the scoreline even. Sibanyoni scored the decisive strike just a minute before the hour-mark.

Swallows striker Kagiso Malinga came off the bench to score the only goal as Bafana Bafana got their Cosafa Cup campaign off to a winning start by ...
Sport
2 months ago

Bafana Bafana assistant coach Helman Mkhalele has urged players to use the Cosafa Cup to audition for places in the team ahead of the Fifa 2022 Qatar ...
Sport
2 months ago
Next Article