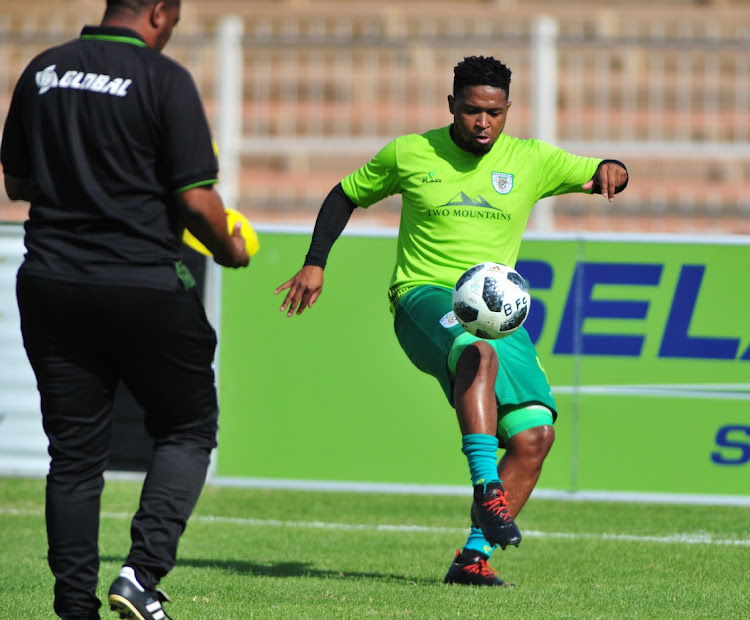 Swallows coach Brandon Truter has advised new signing Thandani Ntshumayelo to remain patient at the club and wait for his opportunity when the new season gets under way.

Ntshumayelo will officially be back to playing professional football again next season after signing a one-year deal with the Soweto side.

Truter feels “Bibo” deserves another opportunity to resurrect his career after his four-year drug ban, which was reduced to two years after an appeal. Bibo was banned after he tested positive for drug use while he was playing for Orlando Pirates in 2016.

The coach said Bibo is ready to make amends for the time lost, but warned against him being over eager to prove himself. “We gave him an opportunity here. He has been with us since the beginning of the year and we decided to give him a chance,” Truter told Sowetan.

“He has played in our friendly matches and he is looking good. But he must be patient and must not overdo things. I’ve seen him trying to do too much. He still has a lot of time ahead and he must take it easy.

“He will get his chance. He must just continue to work on his fitness. If he overdoes things, he may end up getting injuries.”

Before signing with Swallows, the 31-year-old had been without a club, after a short stay with Baroka. He will want to use this opportunity to revive his career. “It has been a long time for him without playing competitive football and we will support him,” Truter said.

“I'm happy to have him and with time, I think we will see the best of him. It will take time for him, but as I said, he will need to be patient with himself and take it slowly. He will get the opportunity, no doubt about that.”

“We currently have few players we are looking at but we will make announcements at the right time. We started with our preseason on Tuesday and we see how it goes.”

Swallows chairperson David Mogashoa has revealed they're in no rush to take a decision on Thandani "Bibo" Ntshumayelo, who has been training with ...
Sport
7 months ago

For a team who could easily have been extinct, Swallows have soared impressively in the previous DStv Premiership season.
Sport
2 months ago

As the curtain has come down on the 2020/21 Premier Soccer League (PSL) campaign, Neville Khoza and Sihle Ndebele pick the five best and worst ...
Sport
3 months ago
Next Article