Beating England at Wembley would be a dream, says Verratti

Azzurri go into Euro final with no fear 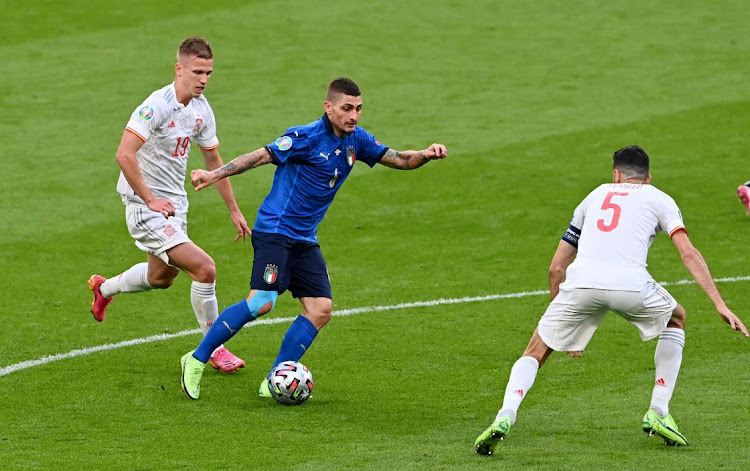 Rome - Italy midfielder Marco Verratti said beating England at Wembley in the Euro 2020 final on Sunday (9pm) would be a dream, insisting his side go into the match with no fear.

England booked their first European Championship final spot with a 2-1 extra-time victory over Denmark at Wembley on Wednesday and now face the Azzurri who beat Spain on penalties at the same stadium on Tuesday.

Gareth Southgate's England side have won 15 of their last 17 matches at Wembley in all competitions, scoring 46 goals and conceding five, but that record does not faze Verratti.

"We saw the match (against Denmark) together," he told a news conference. "England are strong and they have players who are also technically good.

"They deserve to be in this final in a stadium they know well. It would be a dream to be able to win it like this in their stadium.

"We are used to playing in stadiums like this, it will give us strength too. We are not afraid. We are happy that they won, now we are both playing in a historic final."

Italy are familiar with Wembley having also beaten Austria after extra time in their last 16 match at the stadium before ousting top-ranked Belgium in Munich and then the Spaniards.

England reached the final courtesy of an extra-time penalty, converted on the rebound by captain Harry Kane, following a foul on Raheem Sterling - a decision that has caused controversy.

Paris St Germain midfielder Verratti missed the start of the Euros with a knee problem after a domestic season plagued by injuries and is grateful to be part of Italy's run to the final.

"Three or four days after the injury I thought I would not be fit for the tournament," he added.

"The nightmare of missing Euro 2016 (also through injury) came back but thanks to the national team medical staff I was able to play this time, and do so in excellent condition."

Move over Messi, Argentina has a new hero

Emiliano Martinez needed only a month to establish himself as Argentina's number one goalkeeper and this week he became a new national hero by saving ...
Sport
3 months ago

Spain's Euro 2020 campaign began in disarray and ended with the pain of a penalty shootout defeat by Italy in the semi-finals but this was ultimately ...
Sport
3 months ago

England defender Harry Maguire will be at the heart of Gareth Southgate's defence in tonight's Euro 2020 semifinal against Denmark, but he did not ...
Sport
3 months ago
Next Article