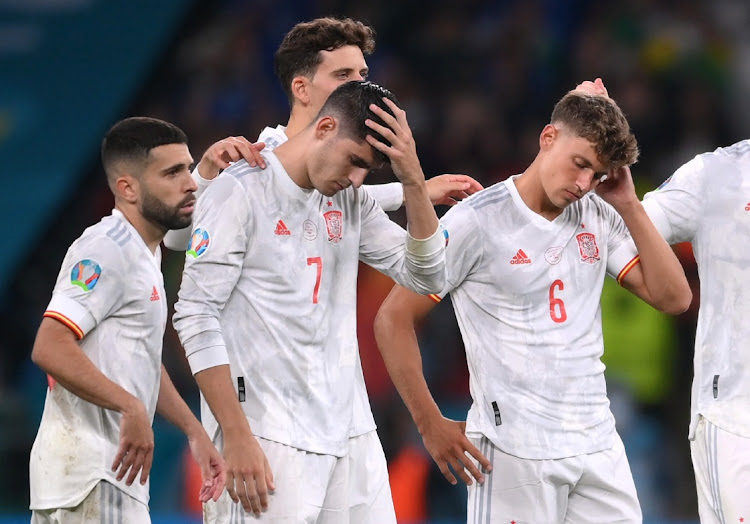 London - Spain's Euro 2020 campaign began in disarray and ended with the pain of a penalty shootout defeat by Italy in the semi-finals but this was ultimately a story of redemption and renewal that gives them plenty of hope for the future.

Luis Enrique's young side were not the favourites for the tournament or against Italy but they produced a bold and thrilling display in the 1-1 draw at Wembley and dominated extra-time but could not make their superiority count and lost the battle from the spot 4-2.

It was a fitting ending to a tournament where Spain were often unable to convert their chances. However, above all there was a sense of pride after winning over their doubters, having been booed by their own supporters in Seville and heavily criticised by pundits at home and abroad.

"I've seen many positive things, young players who contributed so much. The objective was to form a team and make the fans proud of their players and we did that," said Luis Enrique.

The coach certainly did not begin the campaign with everyone behind him after he left out captain and all-time appearance maker Sergio Ramos while naming no players from Real Madrid in his squad, to the chagrin of many renowned pundits.

Opening draws against Sweden and Poland on a patchy pitch at the atmosphere-sapping La Cartuja stadium provoked furious headlines and their chances were quickly written off.

Luis Enrique staunchly defended his side though, especially inconsistent striker Alvaro Morata, and compared Spain to a bottle of champagne that was about to be uncorked.

They then trounced Slovakia 5-0 and beat Croatia 5-3 in extra time, with Morata scoring a remarkable and crucial goal.

Their quarter-final win on penalties against Switzerland was less inspiring but they saved their best performance for last against Italy, with youngsters such as Dani Olmo and Pedri coming to the fore, even though the match ended in tears.

"With honour" said the front cover of newspaper Marca yesterday.

England defender Harry Maguire will be at the heart of Gareth Southgate's defence in tonight's Euro 2020 semifinal against Denmark, but he did not ...
Sport
3 months ago

Maurizio Sarri says he found Cristiano Ronaldo difficult to manage during his time in charge of Juventus, as he had to consider the “personal ...
Sport
3 months ago

Spain's cycle of dominance of European football began and ended with Italy, so it is fitting their hopes of a reconquest will see them face Roberto ...
Sport
3 months ago
Next Article