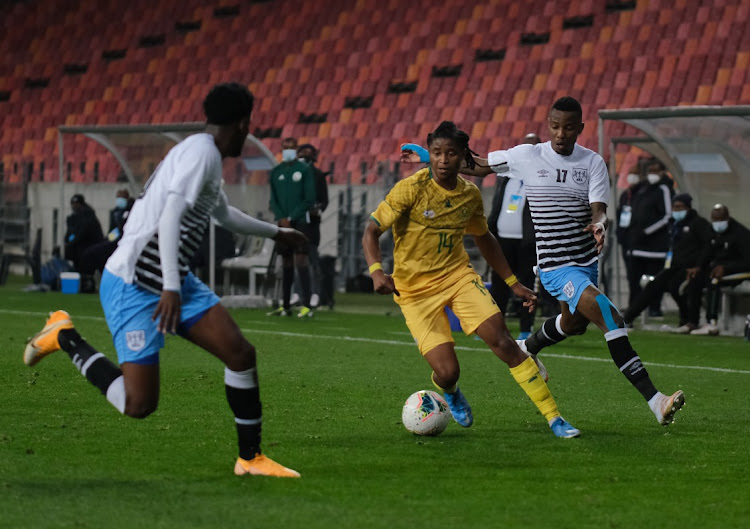 Siyethemba Sithebe during the COSAFA Cup match between South Africa and Botswana at Nelson Mandela Stadium on July 06, 2021 in Gqeberha.
Image: Michael Sheehan

Bafana Bafana assistant coach Helman Mkhalele will not be on the bench in the remaining Cosafa Cup group phase matches against eSwatini today and Lesotho next week.

Mkhalele, who missed Bafana's 1-0 victory over Botswana on Tuesday at Nelson Mandela Bay Stadium, together with goalkeeping coach Lucky Shiburi, are in quarantine after they tested positive for Covid-19.

This was confirmed by team doctor Tshepo Molobi yesterday and that the duo would complete their quarantine on Wednesday.

“We received the results on Tuesday, the day of the match and they did confirm our suspicion of Covid positivity,” Molobi told Safa media.

“Now that will mean isolation for them from Tuesday and it will be a full 10 days of quarantine until next Wednesday and they will come back on Thursday.

“At the moment, they have been relocated to different sites identified by the tournament organisers.”

Molobi was not sure if they would be able to return to the bench after completing their 10-day isolation.

“I’m personally in close contact with them, not physically, but we are in constant communication,” he said.

Morena Ramoreboli, who was in charge when Bafana edged Botswana in the opening match, will lead the team in the remaining group games.

Ramoreboli was full of praise for the team even though he feels they can improve when they meet eSwatini in their second match today (3pm) and Lesotho on Tuesday.

“Credit to the boys, I think it was important to win this match. It was not easy. We never had smooth preparation,” Ramoreboli said.

“But they were willing to go out there and fight and die for the country. I think they did exactly that and I think coach Helman has done a great job with how we prepared the team.

“It was easy for me as well to adapt to how he wanted us to play because we have been doing things together. I think everybody is happy in the camp after such a performance.

“We will grow when the tournament continues because we never had enough players on the bench due to a lot of reasons. But I believe that in the next match, we might have a better bench which may give us more options."

Swallows striker Kagiso Malinga came off the bench to score the only goal as Bafana Bafana got their Cosafa Cup campaign off to a winning start by ...
Sport
6 months ago

Bafana Bafana assistant coach Helman Mkhalele has urged players to use the Cosafa Cup to audition for places in the team ahead of the Fifa 2022 Qatar ...
Sport
6 months ago

The decision to appoint AmaZulu goalkeeper Veli Mothwa Bafana Bafana captain for the Cosafa tournament caught him by surprise.
Sport
6 months ago
Next Article