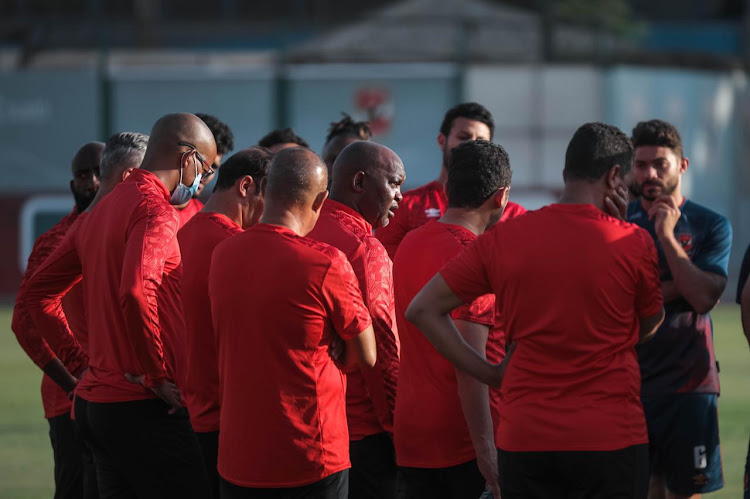 Al Ahly coach Pitso Mosimane has cautioned of Kaizer Chiefs’ remarkable unpredictability in 2020-21 as a dangerous factor for his team to be wary of in the Caf Champions League final on July 17.

Chiefs — in a domestic season where they changed coach Gavin Hunt with two matches to go in the DStv Premiership, won those to scramble to eighth place, and went to a sixth campaign without a trophy — are one of the most unlikely Champions League finalists in recent memory.

Mosimane cautioned Chiefs have been a different team in the Champions League, reaching their first group phase, then progressing past Simba SC and Wydad Athletic in the knockout stage with gritty performances.

Even in continental football, Mosimane stressed, Chiefs’ performances were far from perfect and erratic.

They lost 4-0 against Wydad in neutral Burkina Faso in the group stage, and 3-0 in the second leg to Simba in Tanzania in the quarterfinals having won 4-0 at home. Amakhosi defended like their lives depended on it beating Wydad in the semifinal via a 1-0 win in Casablanca and 0-0 draw at FNB Stadium.

Attempting to explain Chiefs, and their 2020-21 season, to the Egyptian press, Mosimane simply advised: “Don’t try to make sense of it.”

“I knew Kaizer Chiefs well when I was in SA,” the former Mamelodi Sundowns coach, who joined Ahly in a bombshell move in September last year, said.

Road to the final, meeting Kaizer Chiefs in CAFCL final

“This season I don’t know Kaizer Chiefs, because they changed the coach [Hunt replaced Ernst Middendorp at the start of 2020-21], and then they removed that coach and brought another coach [Arthur Zwane as caretaker].

“And in SA in the league they didn’t play very well. Normally they are number two or three behind Sundowns, or four, somewhere there — it’s like Zamalek and Al Ahly here. So they are a good team.

“This is a team that last season when I was at Sundowns, were No.1 from the beginning until the last 15 minutes. And it’s the same team. So you ask yourself, ‘What happened to this team?’

“They lost 4-0 to Wydad — not in Wydad, in a neutral place. And then they go to Wydad and they win.

“You must not try and make sense out of it. You must just focus on their games in the Champions League because these are their best games.”

By the time of the final at Stade Mohamed V in Casablanca Chiefs will have had six weeks of domestic off-season, having only played the two legs of the semi since the end of the PSL on June 5.

Champions League defending champions Ahly have 14 matches left — three before the final against Chiefs, and 11 after — in an Egyptian Premier League season that only began in December due to Covid-19.

Having also competed in the Fifa Club World Cup, Ahly are toughened from a lot of top-level matches, but must also be weary to some degree.

“I don’t know if it’s an advantage or a disadvantage,” Mosimane said of his team going into the Champions League final still playing domestically.

“If you say it’s an advantage [for Ahly], then Chiefs are not playing and they don’t have injuries and all that. You can say it’s a disadvantage for us, we might get injuries and overload from too many games from playing catch-up in the Egyptian league.

“You look at it the way you want to. It’s very tricky.”

Motaung Jr's appointment follows that of former Bafana Bafana coach Molefi Ntseki as head of technical and development last month, as the club aim to ...
Sport
6 months ago
Next Article