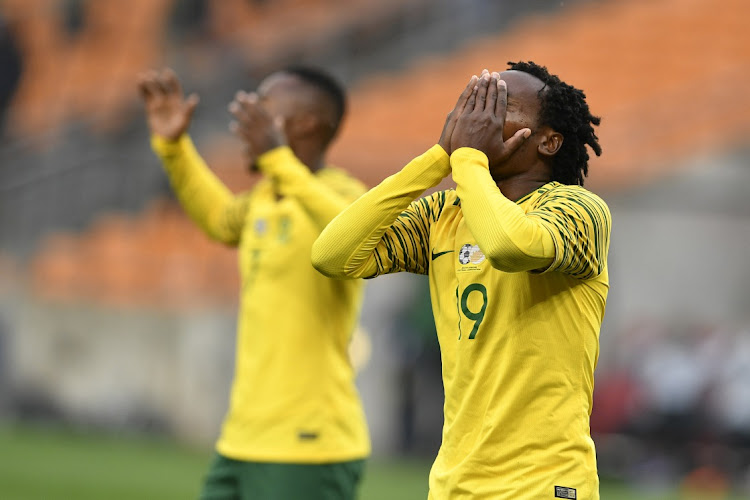 Bafana Bafana star forward Percy Tau was in coach David Notoane's plans as an overage player for the Tokyo Games but his club Brighton and Hove Albion in England refused to release him.
Image: Gallo Images

The SA Under-23 squad heading to the Tokyo Olympic Games will be announced on Thursday or Friday‚ South African Sports Confederation and Olympic Committee (Sascoc) media officer Jessica Choga said on Wednesday.

David Notoane‚ the team’s coach‚ submitted his team to Sascoc a few days ago and what now remains is the official announcement before the team departs to play in its third Olympic tournament after 2000 and 2016 appearances.

“The SA under-23 team will be one of the final teams and individual athletes that Sascoc will be announcing this week‚” Choga told TimesLIVE.

“It could be Thursday or Friday because we have to submit our full team to represent SA at the Games before July 5.”

Notoane told Sunday Times at the weekend that players like SA soccer’s golden boy Percy Tau and winger Gift Links will not be part of his 18-man squad.

This was after their clubs – Brighton and Hove Albion in England and Aarhus AGF in Denmark – refused to release them as the Games fall outside of the Fifa calendar.

The SA team will face hosts Japan‚ Mexico and France in Group A.

The French team will also come to the tournament without 2018 Fifa World Cup-winner‚ Kylian Mbappe (22).

The PSG striker‚ who was with the French senior national team in the Euro 2020‚ was not named in his country’s under-23 squad released on Friday.

Three overage players are allowed in a squad.

Since qualifying for the Games in December 2019 there has been little action for Notoane’s charges mainly due to Covid-19 and many tournaments and friendlies being cancelled.

Notoane‚ who will be assisted by Kwanele Kopo at the Games‚ will be devastated again to know that a friendly that his side were to play against Saudi Arabia before landing in Tokyo has also been called off.

Notoane’s team lost three of the four preparation friendlies‚ including two against Egypt two weeks ago.

The 3-0 and 2-0 defeats against the Egyptians came seven months after the SA side played Saudi Arabia in November‚ losing one match 3-2 and the other ending in a 1-1 draw.

SA’s 2000 Olympic team – which included stars like Benni McCarthy‚ Siyabonga Nomvete and Quinton Fortune – is the only one to register victory at the Games.

That team‚ coached by Shakes Mashaba‚ beat Brazil 3-1 in Sydney‚ but 2-1 loses against Japan and Slovakia saw them bombing out in the group stages just as they did in 2016 in Rio, Brazil.