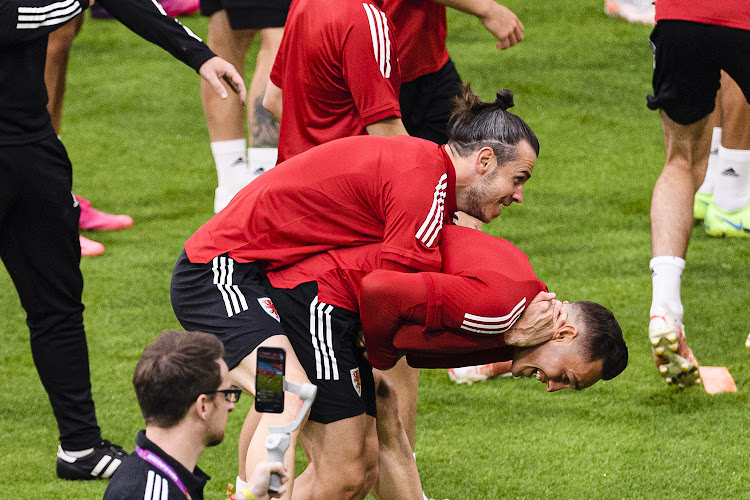 Gareth Bale (left) interacting with his teammate Connor Roberts of Wales in training at Johan Cruijff Arena in Amsterdam on June 25, 2021 ahead of their Uefa Euro 2020 round of 16 match against Denmark.
Image: Marcio Machado/Eurasia Sport Images/Getty Images

Wales captain Gareth Bale said on Friday they will embrace their own underdog status against Denmark, the neutrals’ favourites in the Euro 2020 last-16, adding they will not underestimate their quality.

Wales finished runners-up in Group A behind Italy to reach the knockout stages for a second successive Euros, having soared to the semifinals in 2016.

Denmark stormed into the last-16 with a 4-1 win over Russia in their final group game — days after Christian Eriksen’s collapse due to a cardiac arrest — and will be playing in Amsterdam where they expect a Danish contingent to spur them on.

“We’re always the underdog, we’re used to that tag,” Bale said ahead of Saturday’s match. “But it doesn’t make a difference to us. That’s normal anyway.

“We understand the situation that happened with them and we’ve obviously sent all our best wishes to Christian Eriksen. Come game day tomorrow ... hopefully we can put a great performance in and get the job done.”

Wales boss Robert Page echoed the sentiment, saying that they need to try to ignore the emotion attached to the game and added they were prepared for a “tough challenge” having seen Denmark nearly get a result against group toppers Belgium.

Denmark will be playing their first game away from Copenhagen's Parken Stadium when they take on Wales in their Euro 2020 last 16 tie tomorrow but ...
Sport
10 months ago

“We watched their performance against a very, very good Belgium outfit and (they) more than held their own (in a 2-1 loss),” Page said.

“They haven’t fluked their way here, they’ve earned the right to be here. We’re up against a very good outfit.”

Page confirmed everyone in the squad was fit and available for selection with the exception of defender Ethan Ampadu, who is suspended after his red card in Wales’ 1-0 defeat by Italy on Sunday.

Having rested key players against Italy due to the risk of yellow card suspensions, Page said they would now throw caution to the wind.

“The gloves are off now, we’re in the knockout stages. There’s no managing bookings,” he said, adding that he had also asked players to practise penalties in the event of a shoot-out, including the walk-up from the half line.

“We always practise them ... Come the situation tomorrow, if penalties are required, I’m sure all the boys will be willing to step up for our country,” Bale added.

France coach Didier Deschamps described events in Budapest as magical and insane after his side drew 2-2 with Portugal on a night full of twists and ...
Sport
11 months ago

We did what we had to do, says Portugal coach Santos after France draw

Portugal coach Fernando Santos has described the dilemma he faced during his side's 2-2 draw Euro 2020 Group F with France on Wednesday but insisted ...
Sport
11 months ago

An inspired Luka Modric curled home a magnificent finish as Croatia shrugged off a slow start to Euro 2020 to beat Scotland 3-1 on Tuesday and reach ...
Sport
11 months ago
Next Article