‘I think the confidence was low at the beginning’, defender admits 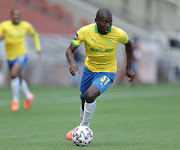 After winning his first league title with Mamelodi Sundowns in his first season, defender Aubrey Modiba is satisfied with his progress at the club.

The left-back joined Sundowns from SuperSport United and made 30 appearances across all competitions last season.

“I had ups and downs. Everyone knows that I didn’t start well. But I had a strong mentality for me to bounce back because from where I was [at SuperSport], I was playing regularly and to go to another team where you don’t play [it was frustrating],” Modiba told the media after he partnered with Adidas to donate football equipment to his former club Hungry Lions as well as his former primary school, Makgefola in Matshelapata, Limpopo.

“But the reason was that the players were doing well and I waited for my chance to be able to grab it. I think towards the end of the season, I was myself. I was able to help the team as much as I can so they can win the league and I’m happy to win my first medal in the DStv Premiership.”

The 25-year-old also praised coaches Manqoba Mngqithi, Rulani Mokwena and Steve Komphela for always motivating him when he was struggling for confidence.

“I think the confidence was low at the beginning because I was in a new environment. I was more in my shell, and the coaches used to motivate me to come out of my shell because they know the potential that I have,” he said.

“They kept on pushing me and one of the things was the hard work. I needed to work harder so that I can be able to compete. I did that.

“I think the coaches played a role in me coming out of my shell and [being] able to perform. They said to me [that] they know what I can do and I must just play without fear and I will get my confidence back.”

Modiba has also vowed to come back stronger and help the club to do well in all the competitions they will be competing in next season.