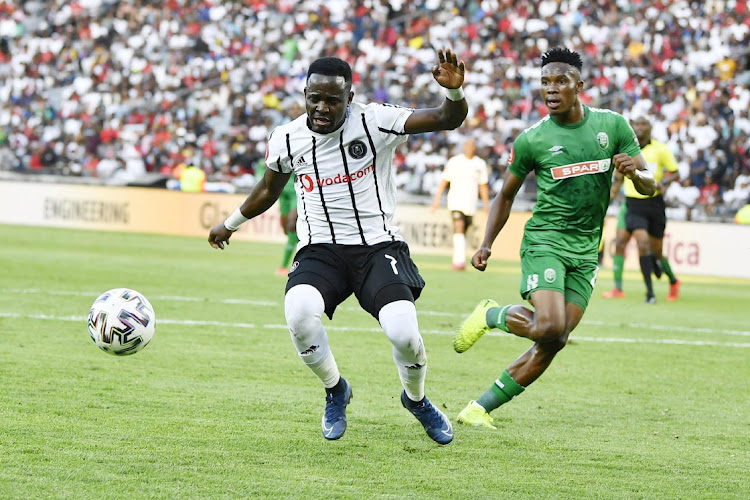 Gabadinho Mhango of Orlando Pirates is challenge by Sibusiso Mabiliso of AmaZulu FC during the Absa Premiership match between Orlando Pirates and AmaZulu FC at Orlando Stadium on January 25, 2020 in Johannesburg.
Image: Lefty Shivambu/Gallo Images

Orlando Pirates striker Gabadinho Mhango has disclosed it didn’t bother him sitting on the bench while natural left-winger Deon Hotto was being used as a false No.9 in some crucial stages of the just concluded season.

Pirates coach Josef Zinnbauer found himself on the receiving end of backlash from the Buccaneers’ faithful for sticking with Hotto even when Mhango was fit. The 28-year-old Malawian forward started just nine of the 22 league games he featured in.

Be that as it may, Mhango has made it clear he took Zinnbauer’s decision, to bench him for a winger, on the chin.

“It [preferring Hotto to spearhead the attack] was the coach’s system that he wanted to use. Before games we’d talk… he’d tell me that in this game the opposition is like this and that so he’ll start Hotto and I didn’t complain,’’ Mhango told Sowetan.

“I know people might have complained that I didn’t start while Hotto started upfront, but they must understand that this is football and what happens is usually based on the coach’s philosophy at that given time.’’

Quizzed who between fellow strikers Tshegofatso Mabasa and Zakhele Lepasa he prefers to partner up with upfront, Mhango gave a diplomatic response by saying he enjoys playing with all his Bucs teammates.

“Football is a team sports, so I can’t choose who I want to play with because it’s not about me but about the team. I enjoy playing with all my teammates. May it be Mabasa or Lepasa it is the same because it’s the team that’s important,’’ Mhango added.

On the back of finishing third on the DStv Premiership table, Mhango has promised they’ll make amends in the impending season. “Next season we won’t disappoint. What I can promise is that we will work harder… we will just pull up our socks,’’ said the Pirates striker.

Ex-AmaZulu GM questions Madlala's role as acting PSL CEO: 'The board of governors is a waste of time'

Former AmaZulu general manager Lunga Sokhela has come out guns blazing and said PSL acting CEO Mato Madlala should not be at the helm of the ...
Sport
7 months ago

Veteran midfielder Reneilwe Letsholonyane will only decide whether he will retire from football before the new season starts in a few weeks.
Sport
6 months ago
Next Article