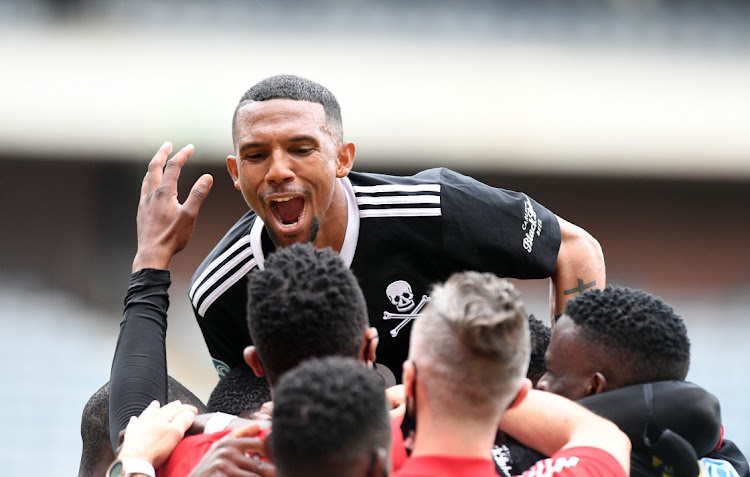 Vincent Pule of Orlando Pirates celebrates scoring a goal with teammates during the 1st Leg of the MTN8 Semi Final match between Orlando Pirates and Kaizer Chiefs.
Image: Gallo Images

“Mashonisa”, as Pule is affectionately known, feels he had a below-par campaign. The lad from Bloemfontein has since set his sights on racking up a minimum of 10 DStv Premiership goals in the 2021/22 season.

“Of course, I am not happy with my contributions [in the 2020/21 term]. I think the numbers have to go up. As an attacker, every season you should be looking to score minimum 10 goals and that’s what I am looking to do in the upcoming season,” Pule told Sowetan.

Even so, Pule knows the Buccaneers’ ambitions are more important than his personal targets. The star underlined that individual goals are meaningless if the club’s collective ambitions are not accomplished.

“Going for double figures [in terms of goals] isn’t non-negotiable but I will always put my team’s goals first because football is a team sport. I won’t be happy if I score many goals and Pirates fail to win trophies … that doesn’t make sense,” said the Pirates winger.

“Firstly, I have to be consistent at Pirates, then the Bafana coaches will see me. So my aim is to do well at club level and start to be a regular Bafana player, that’s one of my ambitions from now on,” noted Pule.

Having finished third again, Pirates will return to the CAF Confederation Cup in the new season. Their Confed Cup journey in the 2020/21 term was ended by Moroccan side Raja Casablanca, who thumped them 5-1 on aggregate in the quarterfinals.

“In continental tournaments the trick is simple … just win your home games because going away is difficult. We have learnt our lessons in the Confed Cup and we’ll be stronger when we return there in the impending season,” Pule said.

“It was very educational for us to play in the quarterfinals and now we all know how to play on that bigger stage, so I am positive next season we can do better by at least reaching the semis.”

Chippa United coach Lehlohonolo Seema and his Richards Bay counterpart Allan Freese admitted that the ongoing court battle between Royal AM and the ...
Sport
10 months ago

Bruce Bvuma’s heroics in Kaizer Chiefs’ momentous 1-0 victory over Wydad Casablanca in the first leg of the CAF Champions League semifinals away at ...
Sport
10 months ago

Royal AM won’t be showing up for their playoff match against Chippa United, which is set for Tuesday at Chatsworth Stadium (3pm).
Sport
10 months ago
Next Article