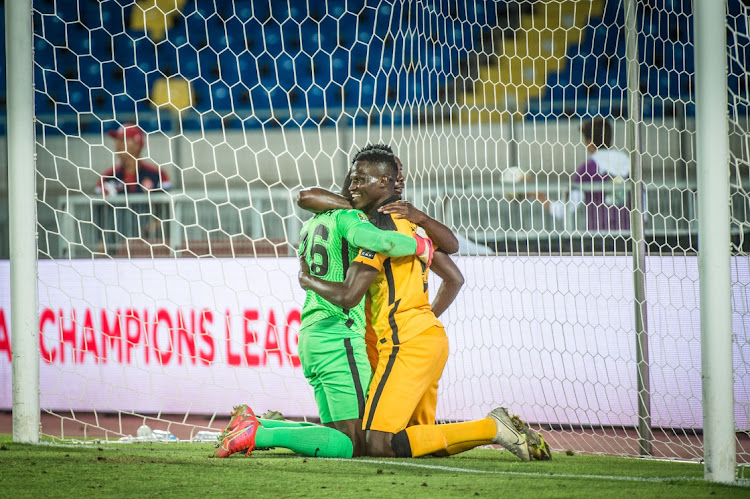 Chiefs’ hero Bruce Bvuma is mobbed by his teammates after keeping a cleansheet in the CAF semifinal first leg against Wydad Casablanca on Saturday. Chiefs won 1-0.
Image: Supplied

Bruce Bvuma’s heroics in Kaizer Chiefs’ momentous 1-0 victory over Wydad Casablanca in the first leg of the CAF Champions League semifinals away at the weekend could be the first step for the 26-year-old goalkeeper to be Amakhosi’s first choice shot-stopper.

That is the belief of Chiefs assistant coach Arthur Zwane, who masterminded the big win in Morocco, where Samir Nurković netted the game’s solitary strike.

Bvuma started the campaign as a third choice keeper behind Daniel Akpeyi and Itumeleng Khune. But injuries to Akpeyi and Khune saw the lad from Braamfischerville step up to the plate. The vocal and commanding Bvuma pulled out a number of brilliant saves to inspire Chiefs to this famous win.

“I told him [Bvuma] that not conceding today [on Saturday ] would go a long way in his career and it happened exactly like we talked about it,” said Zwane of Bvuma.

“Bruce is growing in stature. He’s been working very hard as a young man and because we’re very close, we worked together at development ranks, so before the game I told him that it was key for him to keep a clean sheet.”

As jubilant as they are, Zwane understands there’s still a lot of work to be done in the second leg, billed for FNB Stadium on Saturday (6pm). The Chiefs deputy coach expects the Moroccans to go all out in Johannesburg.

“We know it’s not yet over. We still have 90 minutes to play, which will be a little bit tougher because they’ll come guns blazing. They’ll want to get a goal or two but we’ll be well prepared for them. We just have to continue with the same fighting spirit,” said Zwane.

Nurković, whose goal was initially ruled offside by a linesman before video assistant referee (VAR) intervened, concurred with Zwane that it’s not over yet. The Chiefs striker attributed the victory to teamwork. It was the first time a SA team beat Wydad in Casablanca.

“It was a great team effort. I was really happy to have contributed to the victory but we can’t start celebrating because it’s like   halftime now. Next week we’re playing them at home and we need to make sure we win again,” said Nurković.

Daniel Cardoso believes the work that has been done tightening up a problematic defence at Kaizer Chiefs in the past few weeks just might help the ...
Sport
4 months ago

Wydad Casablanca may be enjoying a good run, but that’s not a concern for Kaizer Chiefs ahead of their CAF Champions League semifinal first leg at ...
Sport
4 months ago