Sello was the chairman who brought financial stability to a team that had hit financial difficulties in next-to-no-time after TTM owner Lawrence Mulaudzi bought the DStv Premiership franchise of Bidvest Wits at the end of the 2019-20 season. 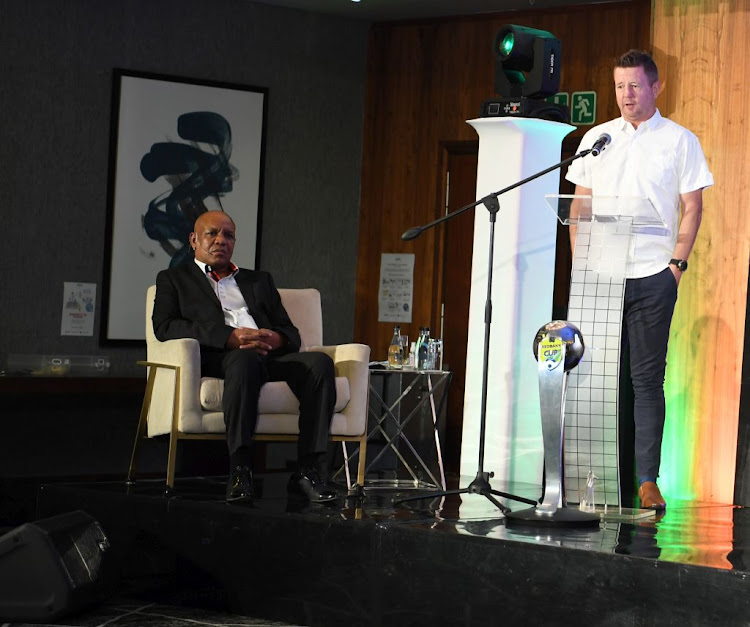 Abram Sello, the chairman of Marumo Gallants FC, says he is in no rush to renew coach Dylan Kerr’s contract at the freshly-renamed club.

Marumo Gallants was the new name launched in Sandton on Thursday for the club known last season as Tshakhuma Tsha Madzivhandila (TTM).

Sello was the chairman who brought financial stability to a team that had hit financial difficulties in next-to-no-time after TTM owner Lawrence Mulaudzi bought the DStv Premiership franchise of Bidvest Wits at the end of the 2019-20 season.

After buying the club in late January Sello brought in the coaching trio of Kerr and assistants Mpho Maleka and David Mathebula. And despite Kerr sitting in the stands from February until early May over an unresolved contractual issue that held up his work permit, TTM ended a creditable 12th.

They even won the Nedbank Cup, where Kerr was finally on the bench in the 1-0 final win against Chippa United on May 10, having received his work permit days earlier.

Sello seems in no rush again to resolve a new contract with Kerr. The 1980s Arcadia Shepherds wing star’s current deal expires at the end of this month.

“At the moment why I can’t talk much is because the contract is still in force until the end of June. And after that, remember, we can still run it month to month, as long as we have got it right before the season starts,” Sello said.

It is the beginning of a new dawn for ambitious football owner Abram Sello, but some questions need to be answered as he opens a new chapter in his ...
Sport
1 year ago

Assuming Royal AM and Polokwane City’s court appeals are unsuccessful to reverse Sekhukhune United’s 2020-21 GladAfrica Championship victory and promotion, that will mean three Limpopo clubs – Gallants, Baroka FC and Sekhukhune – in the top-flight again next season.

That two teams from Limpopo – Polokwane City in 2019-20 and Black Leopards in 2020-21 – have been relegated in two years, seems to suggest the region might be saturated by PSL club representation.

“I think it’s the individual approach and individual belief, and your braveness,” Sello said, asked if he sees this as a potential problem for Marumo.

“We’re going to approach it differently, not that we steal from each other and fight [with the other Limpopo teams]. We will bring new talent that the other teams did not identify.

“About being in Polokwane, in Limpopo, as big as it is, the facilities are limited. And the hotels and stadia are the first place to look at.

“And our local government has to send us their bit to comply with Fifa, with Safa and the PSL.

“... And all our government leadership is very supportive. Everything we do they are watching us – for all those [Limpopo] clubs, not only us.

“That’s why, we can move it to Joburg, but those people need it there. I think the former management of the club made a good decision taking it north, and we say, ‘Guys, you were not wrong, let’s make it happen again’.”

The club formerly known as Tshakhuma Tsha Madzivhandila (TTM) unveiled their new name – Marumo Gallants FC – at the official launch in Sandton on ...
Sport
1 year ago

Club says all debts have been settled
Sport
1 year ago

Recently crowned Mamelodi Sundowns coach Manqoba Mngqithi says he was never bothered by the doubting Thomases who questioned his appointment when he ...
Sport
1 year ago
Next Article