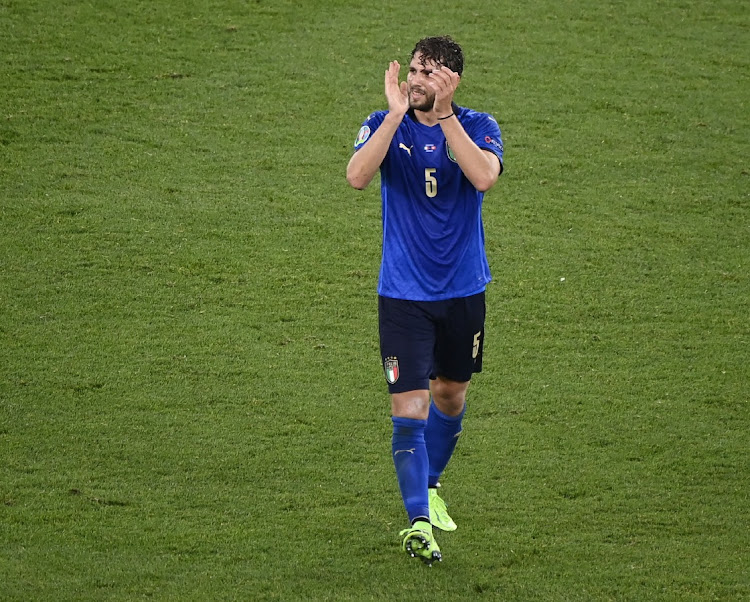 Italy's Manuel Locatelli applauds fans after he comes off as a substitute.
Image: Riccardo Antimiani

Rome - Manuel Locatelli timed his run into the Italy team almost as well as he timed his run for the Azzurri's opening goal against Switzerland on Wednesday.

The midfielder swept a volleyed pass out to the right wing to Domenico Berardi, before racing half the length of the pitch to get on the end of his Sassuolo team mate's cross and fire home.

Locatelli followed that up with a superb left-footed strike from the edge of the box in the second half to top off a night in which he announced himself to a global audience.

Of all the talented youngsters in Roberto Mancini's side, Locatelli has benefited most from Euro 2020 being postponed by a year.

The midfielder earned his first Italy cap in September last year, after the tournament was originally scheduled to take place.

Since his debut, in a 1-0 Nations League win over the Netherlands, Locatelli has featured in 11 of Italy’s 13 games.

"The pandemic helped me a bit, then with work and determination I got here," Locatelli said after the game.

Major tournaments tend to throw up unexpected heroes and Locatelli has already achieved that status with his brace against the Swiss.

It was unexpected mostly because Locatelli is not known for his goalscoring prowess, and this was the first brace of his career.

However, followers of Serie A will remember that he announced himself there in similarly emphatic fashion in October 2016, smashing in a superb winner against Juventus aged 18.

Locatelli, who won the 'star of the match' award, has now given Mancini a selection conundrum.

"We are a wonderful group and I really hope Marco can be back soon, because he is such a talented player who can make the difference," Locatelli said after the game.

Italy are through to the last 16 but will need at least a draw against the Welsh to secure top spot in Group A, making a wholesale rotation unlikely.

Cristiano Ronaldo struck a late double to help holders Portugal get off to a winning start with a 3-0 victory over Hungary in front of a 67,000 crowd ...
Sport
1 month ago

Sweden were out-passed by a factor of over five to one against Spain in their opening Euro 2020 Group E match but they made no apologies for shutting ...
Sport
1 month ago
Next Article