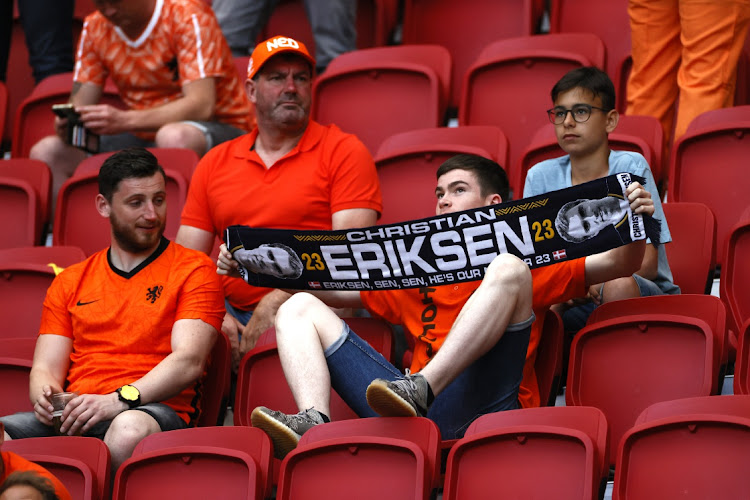 A Netherlands fan holds up a Christian Eriksen (Not pictured) of Denmark scarf in support prior to the UEFA Euro 2020 Championship Group C match between Netherlands and Ukraine at the Johan Cruijff ArenA on June 13, 2021 in Amsterdam, Netherlands.
Image: Koen van Weel

The Danish Football Association has called on the Union of European Football Associations (Uefa) to change its procedures after the collapse of midfielder Christian Eriksen in their Euro 2020 match against Finland and the subsequent decision to resume the game.

The Danes were offered the chance to restart the match the same evening or at midday on the following day.

Despite being shaken up, they resumed the match and lost 1-0 but coach Kasper Hjulmand and his players have since said they would have preferred not to have played.

“It was a wrong decision and completely untenable that the players had to be on the field so soon after the horrible experience,” DBU chair Jesper Moller said in a statement yesterday.

Eriksen suffered a heart attack on the pitch and was taken to hospital where he is now recovering. Uefa has come in for sharp criticism from former Danish internationals Peter Schmeichel and Michael Laudrup, with the latter saying the choice of resuming on either Saturday or Sunday was not a choice at all.

“We now want an evaluation of the entire decision-making process so that we can get all the relevant facts and information on the table,” Moller said.

“We must look at a change in the rules to ensure that we are never in the same situation again. We are ready to present a resolution to Uefa,” he added.

A long club season affected by the Covid-19 pandemic followed by a draining Euro 2020 tournament build-up could have contributed to Denmark ...
Sport
1 month ago

Belgium eased to a 3-0 opening Euro 2020 win over Russia on Saturday but considered the victory a footnote after the frightening collapse of Denmark ...
Sport
1 month ago
Next Article