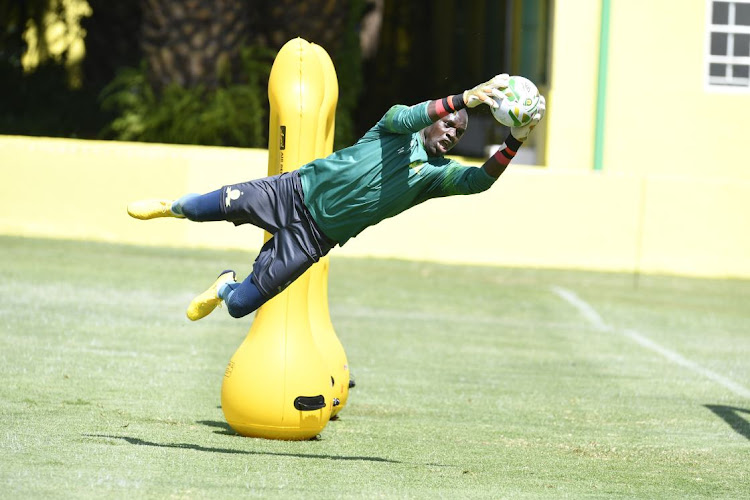 Denis Onyango has urged fellow Mamelodi Sundowns goalkeepers Ricardo Goss and Jody February to work hard and earn their place in the starting line-up, as no-one will hand it to them on a silver platter.

The veteran Ugandan goalkeeper has made the No 1 jersey his own, with Goss and February patiently waiting for their chance.

The recently crowned goalkeeper of the season made 34 appearances for the Brazilians in all competitions with 18 clean sheets in the just-concluded season.

Goss made five appearances in both the Nedbank Cup and CAF Champions League, while February is yet to make his Downs debut.

“We all didn’t come to Sundowns and start playing immediately. Jody and Goss have brought in something different in the team,” Onyango said.

“We believe they have the quality and where they are coming from they were winning. Goss is one for the future for Bafana Bafana and I believe that if he gets more game time, he will eventually get the No 1 spot.

“Jody has a future with Sundowns and the national team as well. For me, to be there, they are pushing me to work hard and them to work hard because we can’t give it to them on a silver plate.

“They must work for it and in the upcoming few years, they will be No1 at Sundowns. They made me a better keeper this season. I got 15 clean sheets, I've never been to that number.

“It shows that the goalkeeping department has done a fantastic job. We learn from each other and whoever plays, he gives his best.”

Having played a role in Sundowns winning their fourth league title in succession and his eighth medal in the Premier Soccer League, the 36-year-old is targeting 10 Premiership medals before he can hang up his gloves.

“The moment I stop believing that I can still win, that would be the end of my career, but I need to keep going. There are never enough trophies. I have never seen anyone saying my trophies are enough, no,” he said.

“I need to keep going. That's what drives me. My eighth league title, and to be sharing it with Hlompho Kekana, is great. I saw him coming from Black Leopards and become a captain at Sundowns, it's amazing.

“Daine Klate was the most decorated player and we managed to beat that. We got to eight medals and we want to make it 10, Kekana and I. It’s a challenge.”

Starlets Evidence Makgopa and Bongokuhle Hlongwane shone the brightest to inspire a makeshift Bafana Bafana to a come-from-behind 3-2 victory over ...
Sport
7 months ago

The DStv Premiership goalkeeper of the season, Denis Onyango, would have loved to play for Uganda against Bafana Bafana at the Orlando Stadium in ...
Sport
7 months ago
Next Article