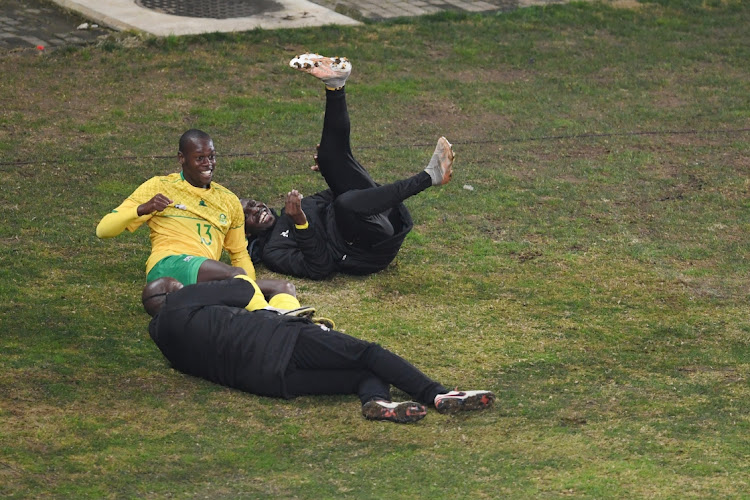 Evidence Makgopa celebrates his goal with teammates during the International Friendly match between South Africa and Uganda at Orlando Stadium.
Image: Lefty Shivambu

Starlets Evidence Makgopa and Bongokuhle Hlongwane shone the brightest to inspire a makeshift Bafana Bafana to a come-from-behind 3-2 victory over Uganda in a friendly here last night.

The 21-year-old Makgopa, who recently won the PSL young player of the season following his blistering form at his club Baroka, came off the bench to net a brace midway through the proceedings. Maritzburg United's Hlongwane, 20, slotted home the second goal.

Lack of experience and poor tactics in the first period nearly cost the SA team.

Bafana had seven debutants in the XI with only Ronwen Williams, Hlongwane, Lebohang Maboe and Innocent Maela the only starters who had donned the senior national side's shirt before last night clash in Soweto.

With head coach Hugo Broos still in his home country, Belgium, for a Covid-19 jab, second assistant Helman Mkhalele stepped up to the plate to become the first player from the renowned class of 1996 to coach the senior national team.

Mkhalele's ascendency to lead the side was also aided by the unavailability of second assistant Cedomir Janevski, who tested positive for Covid midweek.

It was also strange to see Thabiso Kutumela, arguably one of a few proven scorers in this makeshift squad, starting from the bench with his fledging Maritzburg teammate Hlongwane starting as a lone striker.

Bafana had an uninspiring first half, failing to register even a single shot (both on and off target) to test Uganda goalkeeper Ismail Watenga, who's plying his trade in the DStv Premiership with Chippa United.

Uganda penetrated Bafana by using the speed of veteran Emmanuel Okwi, who constantly skinned Mabiliso on the left flank. The Cranes were in front as early as the 17th minutes, thanks to Ibrahim Orit's header from a brilliant Okwi's cross.

Helman Mkhalele will make a small piece of history when he becomes the first member of Bafana Bafana’s celebrated 1996 Africa Cup of Nations-winning ...
Sport
5 months ago

The Covid-19 pandemic has wreaked havoc in the Bafana Bafana camp going into their friendly game against Uganda at the Orlando Stadium today (6pm), ...
Sport
5 months ago

Bafana Bafana’s new assistant-coach Cedomir Janevski has tested positive for Covid-19 on the eve of Thursday evening’s friendly match against Uganda ...
Sport
5 months ago
Next Article