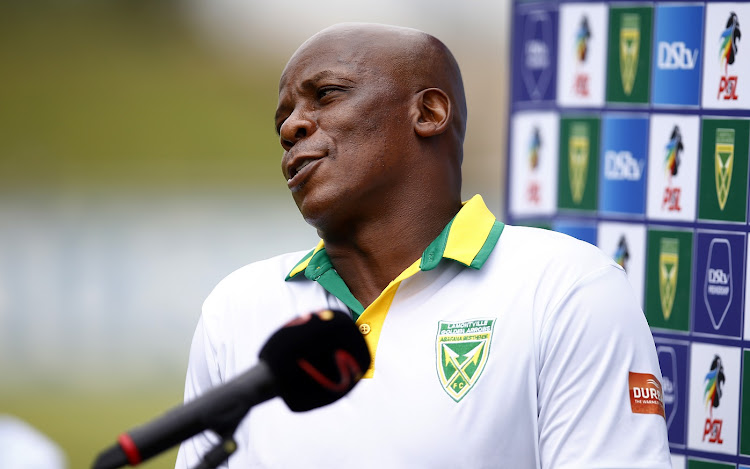 Lamontville Golden Arrows head coach Mandla Ncikazi is proud of the season his club has had in his first season in charge.
Image: Steve Haag /BackPagePix/Gallo Images

Mandla Ncikazi says he is proud of the work put in by his Lamontville Golden Arrows playing squad‚ the staff in the office and the technical team as the unfancied KwaZulu-Natal club concluded what has been a Premiership campaign to remember.

Arrows were sharp as ever throughout the 2020/21 DStv Premiership campaign in Ncikazi’s first season in charge as head coach.

They concluded their league campaign on Saturday with a goalless draw at home against Stellenbosch FC to finish in a commendable fourth place on 47 points from 30 matches.

“I’m really proud to be a coach currently standing in front of such good players and good human beings‚” said Ncikazi after their 0-0 draw against Stellenbosch at the Sugar Ray Xulu stadium.

“There is so much good that has happened. I just hope from this we grow and be better.”

Arrows won 11‚ drew 14 and lost five of their Premiership matches in the just concluded campaign to fall agonisingly short of a third-place finish that would have qualified them for the Caf Confederation Cup next season.

The Confederation Cup spot went to Orlando Pirates who finished in third and three points ahead of Arrows and will be joined by Nedbank Cup winnder Tshakuma FC in the continental competition.

Champions Mamelodi Sundowns will be joined by runners-up AmaZulu in the premier and more lucrative Caf Champions League next season.

“I’m disappointed that we were not able to go into Africa [Caf Confederaton Cup] with this group but I am still proud of them‚” said the 53-year-old born in southern part of KwaZulu-Natal province in Hlokozi.

“I’m still proud of this group and I just hope that all of them spend the little time they have with their families‚ be safe from everything that is happening.

“I’m just proud that I am the coach and I am proud of the technical team that has assisted the team.”

Ncikazi said the majority of his Arrows squad played with injuries during the course of the season but chose to soldier on.

“When you have players that are prepared to represent the badge‚ irrespective of their health‚ then you have a good team and you have got good human beings.

When Ncikazi was appointed head coach after Steve Komphela left Arrows to join Sundowns at the beginning of the season‚ prophets of doom and gloom predicted the worst from a team that had finished 12th the previous season.

But Ncikazi adjusted like a duck to water and had Arrows consistently in the top half of the Premiership table and at times threatening to smash and grab the Premiership title away from Sundowns’ jaws.

He thanked Arrows owner-chairperson Mato Madlala for giving him an opportunity.

According to Ncikazi‚ Arrows is an institution worth a whopping R100m and he thanked Madlala for trusting him with her fortune.

“Finally I am just thankful to the chairlady for giving me an opportunity with all the history that was there.

“I just hope that a bit of happiness is in her face and she can smile for what the players have done while I was here.

"Thank you to everybody in the club.

“Thank you to our loyal supporters. We are really grateful that the team is where it is currently.”

Ncikazi was nominated as the Premier Soccer League coach of the year award alongside Sundowns co-coaches Manqoba Mngqithi and Rulani Mokwena and AmaZulu’s Benni McCarthy.

The awards were announced virtually on Sunday evening with McCarthy walking away with the gong.