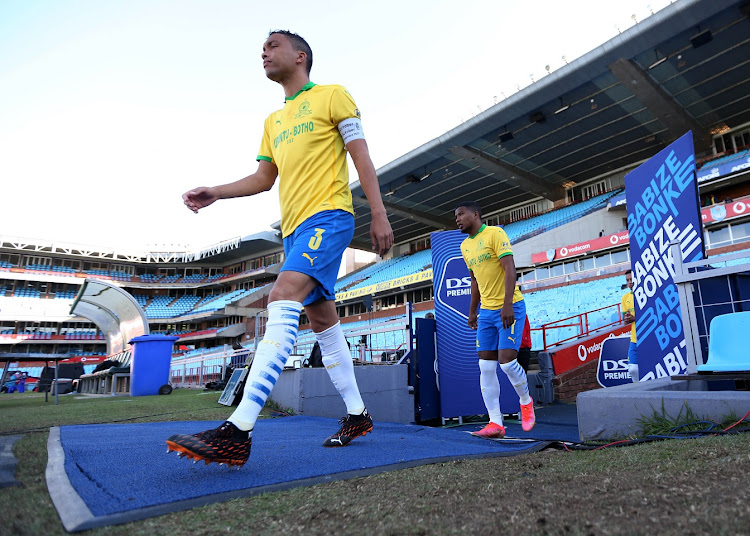 Mamelodi Sundowns captain Ricardo Nascimento leads the champions out at Loftus Versfeld in Pretoria for their final match of the 2020-21 DStv Premiership against Cape Town City on Saturday, June 5, 2021.
Image: Samuel Shivambu/BackpagePix/Gallo Images

Champions Mamelodi Sundowns ended their near invincible DStv Premiership campaign with a flourish by convincingly defeating Cape Town City 3-0 at Loftus on Saturday.

For the Brazilians, who were presented with the trophy, it was a memorable season as they became the first team since the advent of the Premier Soccer League (PSL) in 1996 to win the league title for four successive seasons.

To illustrate their complete dominance during this season where they also reached the knockout stages of the Champions League, they wrapped up this championship 10 days ago with three matches to spare.

If this was enough, Sundowns set another record as the first team in the PSL era to go the entire season without an away defeat after the 2-0 win over Bloemfontein Celtic on Wednesday.

They ended this season having lost only one match to Kaizer Chiefs and that defeat denied them what could have been an unprecedented feat of a PSL team that went entire season without a loss.

Sundowns ended with 19 wins, 10 draws, one loss and 49 goals scored, and they also boast the best defensive record having conceded only 14 goals, their No.1 goalkeeper Denis Onyango having recorded 15 clean sheets.

They opened the scoring through a brilliantly-taken free-kick by Lyle Lakay after referee Moses Kheswa adjudged Abbubaker Mobara to have handled the ball on the edge of the box.

For the opener, Lakay drilled his thunderous shot over the City wall and beyond the reach of goalkeeper Marc Anderson who was covering the other side for his fourth league goal of the season.

City had their moments on attack through forwards Abdul Ajagun, Surprise Ralani and Fagrie Lakay, but they could not find their way past Sundowns goalkeeper Kennedy Mweene.

After the break, City were the first to threaten as Mpho Makola’s header forced defender Thapelo Morena to clear the ball on the line as they pushed for the equaliser and to get back in the game.

For the hosts, most of their attacks came mainly from Aubrey Modiba, Peter Shalulile, Gaston Sirino, Sphelele Mkhulise and Lebohang Maboe, but at times they were denied by impressive City keeper Anderson, the son of Sundowns legend Mark Anderson.

That was not a problem as the likes of Mweene, Lakay, Maboe, Andile Jali, Sirino, Ricardo Nascimento and Shalulile ensured that they receive the trophy with a convincing win.

Sundowns wrapped up this match in the closing stages when the irrepressible Shalulile drilled his 14th and 15th goals of the season as City ended their season in seventh spot on the log.